News
June Market Update
Themes to Consider for the Next Financial Year. For the 12 months to 30 June 2014 the S&P/ASX300 accumulation index was up 17.3%. However, the S&P/ASX300 accumulation index fell 1.5% in June, its first month of negative returns since January 2014 (CYTD +2.9%). Geopolitical risk heightened during June as fighting in Iraq intensified and the oil price moved up in response. The US Fed continued tapering its asset purchases by another US$10bn to a monthly pace of US$35bn. The People’s Bank of China also announced some loosening of lending conditions. The best performing sector during June was the REITs followed by the Utilities. The worst performing sector was the Consumer Staples followed by the Industrials. This month we consider some of the themes which could impact the Australian market over the next 12 months including: (1) the impact of global liquidity no longer getting looser; (2) the subdued household sector; (3) the outlook for the Chinese property sector; (4) the direction of the Australian dollar; and (5) the recent spate of IPOs and M&A

The Australian share market put in another very strong year of performance delivering a return of 17.3% and this follows last year’s performance of the S&P/ASX300 accumulation index of 21.90%. However, Australia did underperform most developed world equity markets for the second month in a row in June. We would attribute this weaker performance to the continued strength of the Australian dollar and the continued concerns about the impact of China’s growth on the outlook for the resources sector (and associated service providers).

The traditional May confession season came late this year, with a spate of retail and media companies downgrading during June on the back of the unseasonably warm start to winter and a sharp decline in consumer confidence post the Federal Budget.

Corporate News
Corporate activity continued during the month with Shell selling down its 19% stake in Woodside (WPL) via a placement and a selective buy-back by the company. In addition, Lend Lease (LLC) has sold its 30% interest in the Bluewater Shopping Centre to Land Securities Group plc for A$1.22bn in gross cash proceeds. The sale implies an initial yield for the purchaser of c4.0% – a very strong result for LLC and reflective of the enormous liquidity searching for yield at present.

The Best of the Month
The best performing sector this month was the REIT sector which rose by +0.6% for the month. The outperformance was driven by Westfield (WFD, +10.8%) after it managed to get approval for the disposal of its remaining domestic assets to Scentre Group (SCG, +2.7%). Other REIT stocks also performed well as the 10 year government bond yield continued to fall.

The Utilities sector also performed well relative to the market delivering a return of 0.0% for the month. DUE (+4.0%) outperformed in June after providing FY15 dividend per share guidance of 17.5 cents per security, which was ahead of market estimates of 17.25 cents.

The Worst of the Month
The Consumer Staples sector performed poorly during June with a decline of 4.6%. This sector was led lower by Woolworth’s (WOW, -6.2%) on no new news.

The Industrials sector also performed poorly during June with a decline of 3.3%. Brambles (BXB, -4.5%) fell during the month likely due to concerns about continued strength in the Australian dollar. 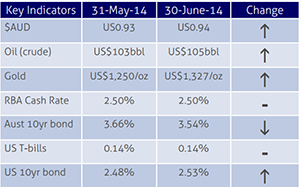 Market Outlook
This month we consider five themes which could influence the direction of the market and/or specific sectors over the next 12 months. Several of the themes are an evolution from last year, so we will comment briefly on the way they played out over the past 12 months where appropriate.

Global Liquidity & Low Interest Rates
The very loose global liquidity and ultra low interest rates may be at or near their peak stimulus effect, subject to no major issues in China or Europe. Although we do not expect domestic rates to rise over the next 12 months, the trend globally may be towards tighter monetary policy. This ultra loose monetary policy, in all major global economies, has been a key ingredient in bidding up asset prices (in most asset classes). From an equity market perspective, the slowdown in the growth rate of global liquidity (even if it is not contracting) will likely see a rise in equity market volatility and investors becoming more discerning about the stocks they hold. From our perspective, this means a focus on companies with solid business models, a degree of pricing power and solid management.

We had expected to see increasing volatility in financial markets during the past financial year as the US Federal Reserve cut the size of its quantitative easing program. Certainly after the initial announcement of the plans to taper in May last year, there was turmoil in debt and equity markets for a number of emerging markets for some months. However, in the first half of 2014 the fears about tapering seem to have been brushed aside as the markets recovered. We do not expect to see another year without a rise in equity market volatility at some point.

Subdued Domestic Economic Growth
Domestic consumer demand is likely to be comparatively weak, which means you need to identify companies with strong business models or a strong productivity story to generate above market returns. As we highlighted last month, generating real income per capita growth over the next decade at the level households and corporates have come to expect, over the past 3 decades, in Australia is going to be a tough task. For the next 12 months, we are of the view consumer demand will be comparatively weak given there will be little in the way of increases in salary or government handouts. This could change if: (1) households decide to cut savings; something they have not been inclined to do since the GFC; or (2) if there is a further cut in interest rates. We may see another cut in interest rates if conditions internationally or domestically deteriorate.

Chinese Growth and Its Impact on Australia
China needs to transform from a fixed asset investment and export driven growth model to a more consumption focused growth model. Steps are being taken by the government to get this underway, but it is difficult to stimulate consumption in the same way you stimulate property or infrastructure spending. The Chinese property sector is now likely in a recession given the anecdotal evidence. The optimists view is that we are just in an adjustment phase and all will be fine (i.e. the same as other property slowdowns in the past 10 years). However, the more sober view is that the Chinese government (at least at the central government level) appears to be facing up to the fact there has been an unprecedented overbuild and excess leverage nurtured by the expansion of the shadow banking system.

In our view, this is likely the beginning of the adjustment phase in the China property sector which seeks to right size the inventories and construction starts, it is going to take many quarters for this process to play out.

As a major consumer of Australia’s key exports (i.e. steel inputs such as iron ore and metallurgical coal) in the construction of property, investors need to follow this matter closely. In the next 12 months, the risks for the price received by our major diversified miners for their iron ore exports are:

(a) the demand for iron ore in China slips at the same time as a substantial increase of supply is coming through – price of iron ore will likely continue to be under pressure in the same way it has been in the 1H14. This should see iron ore stay somewhere between US$85 – US$100 over the next year;

(b) the Chinese authorities implement another round of property or infrastructure stimulus to prop up the domestic construction sector. This just delays the inevitable adjustment which eventually needs to be made given the current overbuild. This could see the price of iron ore higher again for a period; or

(c) the most risk to price arises if the Chinese seek to devalue the renminbi (overvalued by 15% to 25% on some estimates) to gain competitiveness to drive exports. This growth could be used to offset the slowdown in property construction. For Australia, the price of iron ore will shift lower as the cost curve would move down by the same percentage as the currency decline (given the Chinese are the marginal cost producers). This could see the iron ore price move materially lower.

It is outcome (c) which would give rise to the largest potential impact on our market. However, if this happened we would expect the Australian dollar to fall as well as an offset. We are still taking a cautious approach to the Metals & Mining sector until the course of growth in demand for steel in China becomes more apparent.

Australian Dollar Direction
There are very mixed views in the market at present about the direction of the Australian dollar. At one level, we have global investors with free money (due to zero interest rate policy) chasing yield wherever they can find it. As the US QE3 program comes to an end in September/October this year and confidence grows in the US recovery (and hence, the likelihood of a rise in US interest rates), we would expect to see some of this pressure to come off the Australian dollar. The Governor of the Reserve Bank, Glenn Stevens, recently reiterated his view the exchange rate remains high by historical standards (given the decline in commodity prices), and at some point he expects there is going to be a “significant fall”. We saw a fall over the past 12 months in the Australian dollar relative to the US dollar from around $1.05 to $0.93. We expect this trend to continue over the next 12 months. The caveat to this is that we could see an outflow of retail funds from Japan as Abenomics continues to bite, and some of this could seek yield in Australia which would support the dollar.

Increase M&A and IPO Activity
To us, the increased level of M&A and IPO activity suggests we are in the later stages of this bull market cycle. We are generally comfortable with bolt on acquisitions to assist with a set growth strategy (for instance, as we have seen with some bolt on acquisitions from Recall). However, we become far less comfortable as we move to this part of the cycle and a company is still driving growth by acquisitions where competitors have entered the market (for instance, G8 Education where deals are having to become incrementally bigger to be meaningful and other competitors are in the market potentially pushing prices beyond realistic levels).

Much of the IPO activity has centred around transactions for private equity to exit. We have taken a cautious approach given the history of companies brought to the market from this group of investors. We would prefer to see how they report as public companies and assess the state they have been left in after a period in private hands. There is one company we were investors in before the privatisation and we are surprised by the multiple applied in determining the IPO price – nothing had changed the structure of the industry to suggest higher margins were sustainable in the long-term yet investors were paying a much higher multiple than we would ever have attributed to the stock. May be private equity found the secret sauce for the magic pudding! We will have to wait and see.