News
May Market Update
Federal Budget hits income growth reality. The Australian share market continued to move higher during May with the S&P/ASX300 accumulation index rising by 0.6% for the month. The US S&P500 hit a new record high during the month and rose 1.9%. May is traditionally “confession season” for corporates and for the past 5 years there have been a slew of profit downgrades. This May was notable for the lack of large cap downgrades. The best performing sector during May was the Energy sector followed by the Utilities sector. The worst performing sector was Metal & Mining and then the Consumer Discretionary sector. This month we have a look at what Australia needs to do if we are to continue to grow real nominal income per capita at the rate we have for the past 3 decades. As we highlighted last month, there are substantial headwinds. This reality has hit the Federal Budget.

The S&P/ASX300 accumulation index had another positive month and is now up 4.4% since the start of this calendar year. The defensive sectors of the market outperformed as bond yields globally continued to trend lower. Australia lagged most developed and developing world equity markets, with the MSCI World Index returning 1.6% for the month. In the face of a weakening iron ore price and a resilient Australian dollar the Australian equity market may well lag global markets. The key European indices rose to a 6 year high after the ECB President, Mario Draghi, indicated policy makers were looking to ease monetary policy further.

On the domestic economic news front, the 2014-15 Federal Budget took centre stage this month. The central focus of the budget was to reduce recurrent spending, eliminate the deficit over a shorter period than previously anticipated, and invest in infrastructure over the medium term. Many of the of the measures were pre-announced, so there were few surprises, however the confirmation of the tightening of fiscal policy seems to have caused households considerable concern. Consumer confidence fell sharply in May to be 16% lower than it was around the time of the Federal election in September 2013. We will need to wait and see whether sentiment recovers over coming months. On a positive note, the government detailed a very substantial $11.6bn infrastructure investment package during FY15.

Corporate News
May again saw a busy month for corporate activity, highlighted by the proposed acquisition of Aquila Resources (AQG) by Aurizon Holdings and Chinese steelmaker, Baosteel. In the Utility space, Spark Infrastructure (SKI) acquired a 14.1% interest in Duet Group (DUE), whilst in the mid cap sector of the market, SAI Global disclosed receipt of a conditional proposal from private equity group PEP. The re-listing of Spotless Group (SPO) in May was the largest IPO since 2010 with several other businesses set to list in June, prior to close of the financial year. 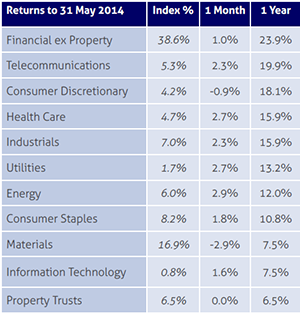 The Best of the Month
The Energy sector was the best performing for the month rising by 2.9%. Oil Search (OSH, +6.1%) led the charge out of the major oil producers amid news PNG LNG had shipped its first cargo ahead of schedule. Woodside (WPL, +3.4%) and Origin (ORG, +1.3%) also outperformed the market.

The Utilities sector also performed strongly during May rising by 2.4%. This was assisted by the decline in bond yields, an acquisition announcement for Envestra (ENV, +17.2%) from Cheung Kong (controlled by Li Ka-shing from Hong Kong), and Spark Infrastructure acquiring a stake in Duet (DUE, +11.1%).

The Consumer Discretionary sector also underperformed the market declining by 0.9%. The Retailing sub-sector (-4.3%) was the key detractor after the Federal Budget meant some of the more optimistic views for the sector had to be reined in. 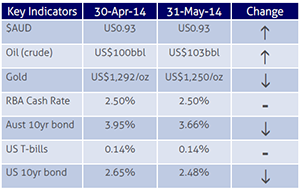 Market Outlook
This month we consider what would be required to maintain growth in real national income per person for the next decade at the level achieved for the past couple of decades. This analysis is an extension of the discussion last month of the impact of the terms of trade on the domestic economy. The detail has been obtained from the Federal Budget Papers 2014, and serves to highlight why the government has sought to take remedial action to fix the budget before a crisis situation emerges.

The following chart shows the sources of growth in real national income per person over the past half century. It also shows two scenarios for income growth in the future given the likely impacts of population ageing and the projected falls in the terms of trade. The contributions to income growth in the period 2013 to 2025 are consistent with the forecasts and projections detailed in the 2014-15 Federal Budget documents. The hatched area is the additional labour productivity growth required to achieve long run average growth in real gross national income per capita. 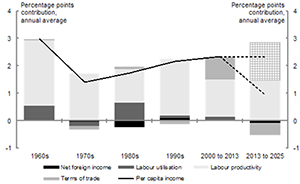 Productivity has consistently been the most significant source of income growth. However, over the past decade or so, it has been the dramatic rise in the terms of trade which has maintained growth in gross national income as productivity growth has waned. Over the coming decade, as we highlighted last month, the terms of trade is expected to decline and detract from income growth. This negative impact will be compounded by a decline in Labour utilisation as the working age population shrinks as the baby boomer retire.

For annual incomes to grow at their historical average of 2.3% over the period to 2025, annual productivity growth would need to increase to about 3% per year to counteract the effects of population ageing and the falling terms of trade. This is well in excess of what has been achieved in the past 50 years, and more than double what has been achieved in the past decade.

According to Treasury, if labour productivity grows at its long run average of around 1.5% per year over the medium-term, per capita incomes would grow on average by about 1% per year – or less than half of what Australians have become used to over the past three decades. Treasury estimates the difference in growth rates translates to a difference in real per capita incomes of $13,000 per year by 2025 or around 20% of today’s average income of $63,500.

What are the implications for the share market from this slower rate of growth in domestic income? It will make earnings and dividend growth for domestically focused companies in aggregate more difficult to achieve. For instance, credit growth for banks should be lower as households have a lower level of overall income to support interest and principal repayments (accompanied by the fact households will not benefit from another sharp move lower in rates experienced over the past 2 decades). Also, retail sales will grow at a slower rate as will rents for retail property trusts. There will of course be winners over the period from improved productivity.

As some may recall, the 1980’s were a period of substantial restructuring in the Australian economy. Best encompassed by Paul Keating’s statement to the effect that we risk becoming a banana republic. The political case was built and both sides of politics supported the changes. These included: (1) removing industry protections and opening up the economy to overseas trade; (2) reducing controls over labour, capital and product markets; (3) reforms to improve the efficiency of markets providing essential services, such as electricity; and (4) taxation reform. This period also saw the floating of the Australian dollar, the introduction of independent setting of interest rates and an improvement in fiscal policy management.

The benefits of these changes flowed through partly in the 1980s and then there was a strong payoff in the 1990s. Can the same type of structural changes be taken this decade to lift productivity growth? At this stage, we view it as highly unlikely, so we will see a lower level of domestic real income growth per capita than we have seen for the past few decades. The reason is that the ground work has not been laid with the population to sell the need for dramatic change, so there is not a political consensus to drive through the necessary changes, particularly around the labour market. That said, there are a number of positive changes which will boost productivity:

The lifting of the retirement age will also assist by increasing the Labour utilisation rate over time.

From our perspective, we will continue to monitor the changes which could be implemented to improve domestic productivity as there will be always be companies that benefit. For instance, we expect Macquarie Bank will benefit from the lift in privatisation work (either as an advisor or through the funds it manages), and Lend Lease should be a beneficiary of additional road construction work in its domestic business. A major thematic for us has been to identify companies which can achieve sustainable productivity improvements (via reducing costs or lifting output from existing assets). An understanding also assists us when examining other areas to invest in. For instance, it does not mean we will not invest in the retail sector; however, we will want to pay a lower multiple given the lower expected growth rate.