News
Themes For August
Following a month of strong returns in July, global financial markets were much more sedate in August, generally recording small gains for the month. The US share market was essentially flat and remarkably, it has now been over 40 trading days since it has seen a move of greater than 1%. European markets were generally stronger with Germany up 2.5% and the UK shrugging off its post-Brexit jitters, posting a gain of 1.7%. Asian markets were generally stronger with China up 3.6% and Hong Kong up 5% however Japan was more subdued rising by just 0.6% as it struggles to implement convincing economic reforms. The exception in this region was the Australian share market which declined 1.6% after a sharp 2.3% correction in the final week of the month. It should be remembered however that our market was up 6.3% in July so some pull back was not unexpected nor any cause for concern. Bond markets barely moved for the month as investors marked time in anticipation of the next move in US cash rates. Amongst the major commodities, oil continued its rollercoaster ride to finish up 8% for the month on hopes that OPEC countries may cooperate with Russia to limit future supply. Iron ore was slightly firmer but gold fell 3% in reaction to the stronger USD. The strength in the USD was a feature of foreign exchange markets, however the AUD held up fairly well declining only marginally against the greenback.

The weaker tone for the Australian market overshadowed what was a reasonable profit reporting season for listed Australian companies, with aggregate results better than expected.  On the downside, forward earnings growth estimates were reduced across the Industrial, Financial and Energy sectors. As mentioned in previous reports, a precondition for share prices to move substantially higher from here is growth in company earnings, especially driven by an improvement in top line revenue.

As flagged in last month’s report, the RBA cut cash rates by 0.25% in early August on the back of favourable inflation and wages data. Data released subsequent to the easing was somewhat mixed with retail sales weaker than expected however employment data appeared strong but was largely concentrated in part time work. We continue to believe that the RBA has more room to cut cash rates further and are likely to do so following the release of the Sept Quarter CPI which is likely to confirm underlying inflation remains below the RBA’s target band of 2-3%. 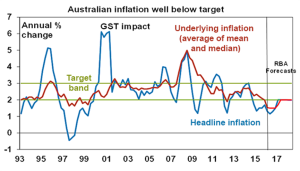 Who is right, the Market or the Fed?

Without a doubt, the critical factor influencing the direction of global financial markets at present is speculation concerning the future path of US interest rates. Most major Central Banks continue to ease policy led by the European Central Bank, the Bank of England, the Bank of Japan and our own Reserve Bank. By contrast, the US Federal Reserve is determined to continue the process of “normalising” interest rates by raising the Fed Funds rate which was last increased by 0.25% in December 2015.

Against this backdrop, the annual gathering of US Federal Reserve Governors in the town of Jackson Hole Wyoming, attracted more than its share of attention this year. Comments by Fed Chairperson Janet Yellen were particularly hawkish, indicating that the case for a policy tightening was strengthening. Fed Vice Chairman Stanley Fischer said Yellen’s comments were consistent with possibly two rate hikes this year indicating that the market may have become too complacent about the near term prospect of rate hikes in the US. The Fed Funds futures market is pricing just a 24% chance of a rate hike in September and a 52% chance of a December hike. The next Federal Open Market Committee meeting is to be held on 20-21 September. It is no secret that the US Fed would like to tighten policy sooner rather than later, however they need to be able to point to economic data to justify this. While the strong employment report in July provided evidence of emerging economic growth, the weaker than expected August result which saw a disappointing 151,000 new jobs created, weakened the case for a tightening. Wages pressures remain modest and are struggling to push inflation towards the Fed’s 2% target level. The Jackson Hole comments pushed the USD higher for the month as the market anticipated the prospect of wider interest rate differentials with other countries which are still easing monetary policy. Adding to the conundrum for the Fed is the looming November Presidential election where a tightening in the polls recently is causing uncertainty, which is likely to subdue growth. We continue to believe a 0.25% rate hike in the US is likely in December.

The investment landscape has not changed materially over the month and as a consequence, we have not changed the asset allocation strategy for diversified portfolios. Global growth remains modest, inflation is very low to non-existent, Central Bank liquidity is very easy and company profits are struggling to meet expectations. Both share and bond markets have benefitted enormously from the combination of extraordinarily low interest rates and quantitative easing measures. While share market valuations are not cheap by historic standards, they remain attractive relative to defensive assets such as government bonds. The only problem with this comparison is that bonds are now expensive, artificially supported by the impact of huge bond buying programs by Central Banks. With bond yields at such low levels, and actually negative in markets like Germany and Japan, the price of bonds is highly sensitive to any movement in yields from here. When bond markets begin to normalise on a global basis, which may be some time off, returns from the normally defensive asset class of fixed interest could well be negative. While shares would also be adversely affected by a sell-off in bonds, the likely improvement in earnings growth that would accompany a tightening environment would cushion the impact on share prices. For this reason we continue to favour both Australian and international shares in diversified portfolios compared to more defensive assets such as fixed interest and cash. Importantly, nominal returns are likely to be more subdued than has been the case in the past with single digit returns likely to be more the norm going forward.