News
Themes For August
Financial markets shrugged off a string of turbulent events during August to post respectable returns for the month. Asian markets were a mixed bag with a continuation in the run of strong data from mainland China propelling Shanghai up 2.5% and Hong Kong 2.4%. On the flip side, Japan fell by 1.4% and South Korea 1.6% being the most directly impacted by the political tensions with North Korea. The US market finished marginally ahead advancing by just 0.1% to post its 5th consecutive monthly gain, a remarkable result given the geopolitical tensions, the impact of Hurricane Harvey and ongoing policy paralysis within the Trump Presidency. European shares were weaker led by Germany down 0.5% due to the negative impact of the stronger EUR on export oriented companies such as German auto makers. The Australian market survived a disappointing reporting season to finish flat for the month. Stronger iron ore, gold and base metals prices were the catalyst for a stronger materials sector while the energy sector was boosted by production upgrades from major oil producers. On the negative side, a cut to Telstra’s dividend pushed the Telco sector down 9.7% while weakness from banks and insurance companies weighed down the large financials sector. While the USD was generally weaker against the EUR and JPY over the month, the AUD was essentially flat against the greenback. In fixed interest markets, the Australian 10 year bond yield was a few points weaker finishing at 2.71% while US 10 year bonds were stronger falling 17bp to 2.12% as expectations for monetary tightening were adjusted as a consequence of a benign inflation outlook.

The reporting season for Australian companies was disappointing in aggregate however there were mixed results across the market. The resource sector was a standout as a consequence of the tail wind from stronger commodity prices, which saw FY17 resources earnings double from the previous year, while there were some high profile disappointments from industrial companies especially in the telecommunications and insurance sectors. The profitability of the listed corporate sector in Australia is somewhat at odds with business confidence surveys which suggests a much more buoyant outlook than is evident in the recent earnings results and outlook statements.

As a consequence of FY17 reported earnings, expectations for FY18 were revised downwards with the market in aggregate now only expecting earnings growth of just 2% for the 2018 financial year. While it is reasonable to expect that the strong growth in the resource sector will not be repeated, earnings growth for the market (excluding resources) is expected to be just 4% while industrials (excluding financials) are expected to deliver just 7%. Negative earnings revisions usually are a harbinger of near term underperformance.

For some time we have held a more sanguine view about the prospects for the Australia market as major overseas markets offer more attractive earnings growth prospects supported by more stimulatory policy settings. For example, the chart below shows positive earnings revisions in the US for all S&P 500 sectors (except energy) since the end of the June quarter. 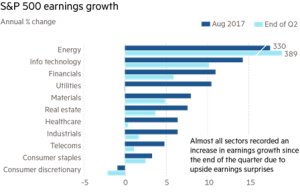 In somewhat of a contradiction to listed company profit results, recent economic data in Australia has printed on the positive side culminating in a decent 0.8% June quarter GDP growth, bringing the annual growth rate to 1.8%. Retail trade data released during the month showed an improvement in discretionary spending despite tepid growth in real wages. Building approvals were 10.9% stronger boosted by a healthy 20% improvement in apartment approvals, which seems to indicate that the restraining impact of tighter lending regulations has all but washed through the system. Plant and equipment investment was 2.6% stronger while capex and construction surveys indicated a positive revision for non-mining capex from $58 billion to $70 billion. Net exports bounced back from a weak result in Q1 to post a positive contribution on the back of improved commodity export volumes. Not surprisingly, the RBA in their Statement of Monetary policy reaffirmed that the current cash rate of 1.5% was appropriate although they would prefer to see the stubbornly high AUD decline somewhat to provide stimulation to the tradable goods and services sector of the economy. We do not expect any increase in Australian official cash rates until well into 2018 which should see a weaker AUD as the US moves to gradually tighten policy.

There is no doubt that rising political tensions on the Korean Peninsula have been a real source of instability for financial markets. The share markets of their geographically closest and most threatened neighbours of South Korea and Japan have experienced declines. The price of gold has risen sharply as it has traditional been used as a hedge against political uncertainty. While the risk to global security from North Korea’s nuclear weapons program has been a concern for many years, recent ballistic missile and hydrogen bomb tests have demonstrated a much more developed program than previously thought, elevating concerns from the US and the rest of the world. It is clear that many years of diplomacy and UN sanctions have not deterred North Korea who have consistently reneged on agreements and evaded UN inspections to fast track their nuclear ambitions. From an investment strategy perspective, it is very difficult to determine just how seriously to take the political posturing and brinkmanship being employed by all parties. North Korea is a totalitarian regime ruling an impoverished and repressed nation. On a global stage it is considered an international pariah by almost all countries with the exception of China, which is their closest ally and major trading partner and no doubt the key to any diplomatic solution. North Korea’s ruling Kim family has used the threat of a nuclear capability as both a means of maintaining power as well as a powerful bargaining chip for concessions from the international community. While it is impossible to peer into the mind of such an unpredictable person as the North Korean leader Kim Jong-un, it’s hard to understand what would be achieved by launching a pre-emptive strike against either the US or any of its allies, which would certainly result in retaliatory action that would decimate his country. While we are closely monitoring the situation, our stance is that the tough talk and sabre rattling will not ultimately result in a military conflict and any substantial decline in equity markets due to concerns about this would represent a longer term buying opportunity.

Despite intermittent bouts of financial market turmoil, it must be remembered that underlying investment fundamentals supporting financial markets remain sound. Global liquidity remains very supportive for equity markets with expansionary monetary policies still in place in Europe and Japan in particular. Growth in mainland China continues to surprise on the upside, which is providing good support for commodities. While the US is slowly moving to reduce its monetary accommodation, the pace of adjustment will be gradual and only implemented so as not to threaten the pace of recovery. At the recent annual meeting of global Central Bankers at Jackson Hole Wyoming, there was very little change in the outlook or perspective of the world’s most prominent monetary policy makers. The gradual improvement in the global economy remains firmly in place and is providing a sound backdrop for corporate earnings especially in international markets. While equity valuations are not cheap, the macro environment is still much more supportive for equities compared to other alternatives which underpins the growth bias we maintain in diversified portfolios.