News
Themes For February
Share markets around the world put in a solid performance in February building further on gains in recent months. The “Trump Reflation” effect has ignited the animal spirits of the US market, which advanced 4% following 12 straight days of new highs towards the end of the month. European markets were also strong led by the UK up 3.1% and Germany up 2.5% however France was flat as the market was gripped by the uncertainty surrounding the first round of the Presidential election to be held on April 23rd. Across Asia, China and Hong Kong were up just over 2% on positive Chinese data however Japan was flat driven by a weaker Yen. The Australian market was up 2.2% buoyed by a stronger industrials sector as investors digested first half FY17 earnings results. REIT’s had a strong month up 4.3% as positive asset valuations over the half saw NTA’s rise by 5%. The AUD was 1 cent stronger against the USD as rampant iron ore prices (up 12%) drove the local unit higher. Bond markets were a little firmer with the Australian 10 year bond yield falling 7bp with the US equivalent falling 12bp despite the prospect of tighter monetary policy ahead.

Australian economy bounces back in the December quarter

The December quarter National Accounts showed the Australian economy snapped back following the shock decline in the previous quarter. Growth printed at 1.1%, well above the expected 0.8%, to bring the annual growth rate to 2.4%. While the headline number looked healthy, closer inspection of the composition suggests this pace will be difficult to sustain and will struggle to meet the RBA’s target of 3% for 2017. Personal consumption contributed 0.5% but this was largely funded by a reduction in the saving ratio, which fell from 6.3% to 5.2%, rather than from an increase in wages, which actually fell 0.5% for the quarter. It is difficult to see these factors continuing to drive the same level of consumption going forward. In addition to this, the terms of trade improved a whopping 9.1% for the quarter to be up 15.6% for the year on the back of sharply higher iron ore and coal prices. Despite improved demand for bulk commodities from China, it is difficult to see iron ore prices move much higher from here in the short term.

The RBA made it clear in its Statement on Monetary Policy released during the month that they are in no mood to cut cash rates further. Despite inflation persistently running below the lower end of their target band, their principle concern is that with household balance sheets already highly leveraged and property markets in Sydney and Melbourne running red hot, any further reduction in the price of debt will only create further imbalances in these two areas. One concern for the RBA is the stubbornly high AUD which has been buoyed by the strong iron ore price while ignoring the near certainty of a narrowing interest rate differential with the US which will reduce capital flows given a less favourable interest rate carry.

The profit reporting season produced a mixed bag of results but on balance was a mild positive for the Australian market. Positive earnings surprises were 35% outweighing disappointments of 27% and in aggregate 59% of companies reported profit growth as compared to 41% showing contraction. Encouragingly, 80% of companies either maintained or increased their dividends. Resource companies such as BHP and RIO reported spectacular profits on the back of stronger bulk commodity prices, increased dividends, and in RIO’s case a $500m share buyback. Amongst larger industrial companies, there were some high profile disappointments (Telstra, Brambles) which contributed to the negative revision of earnings expectation for industrials (ex financials) for FY17 to just 6% from 10% prior to the reporting season. Bank results were solid with the majors faring better than the regionals. On the positive side, earnings quality was high with top line revenue growth driving earnings rather than manufactured results through financial engineering. Forward PE multiples of around 15 times for the market overall and around 18 times for industrials (ex financials) are reasonable but not cheap. The likelihood of an improving profit trend however gives us comfort that the market will ultimately move high over time. 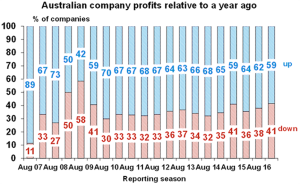 The new Trump administration has made a chaotic start as this unconventional Presidency is ruffling the feathers of the Washington establishment (especially the media) and large sections of the community. The first month in office has been dogged by the slow pace of Senate confirmation of cabinet appointees, the resignation of the National Security Advisor Michael Flynn, and a running battle with the media over the alleged ties between Trump surrogates and Russian efforts to disrupt Hillary Clinton’s election campaign. The concern for the market that this distraction is likely to delay the implementation of the market friendly economic stimulus programs such as corporate tax cuts, the $1 trillion infrastructure spending program and the overhaul of restrictive corporate regulation. While keen to make good his election promises, President Trump’s early focus has been on implementing a travel ban from countries deemed to be terrorist havens and the repeal and replacement of the Affordable Care Act better known as “Obama Care”. The stimulus measures all require Congressional approval, which can be a lengthy process even with Republicans controlling both chambers. There is a growing risk that the market will become impatient about the pace these initiatives are introduced into law.

Meanwhile, the US Federal Reserve are moving ahead with their interest rate normalisation strategy and have relayed to the market that they expect to increase cash rates in 25bp increments on at least 3 occasions over the course of 2017. With the recent positive flow of data in the US, Fed Chair Janet Yellen effectively told the market to expect a 25bp tightening following the next Fed meeting on 14-15th March. It is important to note that these moves do not factor in any acceleration to growth or inflation that may ultimately flow from new stimulus measures yet to be introduced.

Our strategy stance remained broadly unchanged over the month. While we continue to hold a constructive view of equity markets over the medium term, we believe it is becoming increasingly likely there will be some form of correction in the short term. Markets have run very hard over the past 4 months largely on positive sentiment rather than any substantial improvement in fundamentals such as earnings and economic growth. What is definitely occurring is that the interest rate environment in the US is gradually becoming less favorable for equities. Elsewhere in the world, political risks are emerging in Europe as elections in the Netherlands, France and Germany have the potential to be a source of volatility. We are maintaining higher than normal cash and short dated fixed income levels in diversified portfolios as a buying reserve and intend to use this to strengthen equity positions into any market correction.