News
Themes For January
What a difference a month makes! Following the dismal end to 2018, financial markets roared back to life in January to post healthy gains across the board as the New Year kicked off with a renewed sense of optimism. The US equity market led the way once again recording its best monthly advance for 3 years with the S&P 500 rising 8% and the technology laden NASDAQ up a healthy 9.8%. Other major developed markets were a touch more subdued weighed down by regional issues with Europe up close to 6%, the UK 3.6% and China 3.8%. In Australia, our market improved by 3.9% dampened by lingering concerns about the health of the residential property market. 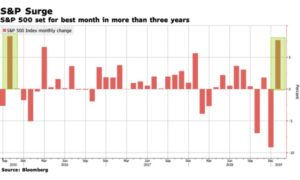 January was also a stellar month for commodities with oil up 18%, iron ore 17.5% higher and nickel the strongest of the base metals up 15.8%. Bond markets were generally firmer with US ten-year bond yields falling 5bp and the Australian equivalent down 11bp to finish at 2.21% as economists began revising expectations on the trajectory of interest rates in 2019. Stronger commodity prices buoyed the AUD, which rose 3.2% against a USD that was fairly flat against other major currencies.

The US Federal Reserve “pivots” on interest rates

The major driver behind the improved market performance in January was the sharp about face by the US Federal Reserve concerning the likely trajectory of interest rates in 2019. As recently as October last year, the message coming from the Fed was to expect a total of four separate 25 basis point rate hikes across the year, bringing the Fed Funds target range to 3.25-3.50%. This would be well above the rate of inflation and somewhat constraining for economic growth amidst clear signs the global economy is slowing, especially in China and Europe. Markets were concerned that should the Fed be too aggressive in tightening liquidity conditions, then a slowdown in the world’s largest economy may induce a global recession – the worst economic scenario for share markets.

While it is clear that the Fed wishes to normalise interest rates, with inflation subdued around their target level of 2% and global pricing pressures falling, the case for further hikes was rightly questioned by business leaders, market pundits and politicians alike. In somewhat of a surprise to the market, Fed Chairman Jerome Powell took heed of the message and announced that the Fed would be “patient” about future rate rises that would be “data dependent”, which was interpreted as meaning no further rate rises for the time being. While the consensus is still for two more 25 basis point hikes this year, we don’t believe there will be any further rate rises at all this year, simply because there is no need to further tighten policy. While the US economy is growing at a healthy clip supporting a very robust labour market, there simply isn’t sufficient cost pressure from wages to suggest inflation risks are rising, especially in an environment of global deflation. This has proved to be a fillip for share markets around the world as the “Powell Put” is likely to provide a significant cushioning effect for the foreseeable future.

In Australia, the RBA has also recently revised down their outlook for growth and inflation, and as a consequence, adjusted their position on monetary policy to neutral, down a notch from their previous tightening bias. We have held the view for quite some time that the RBA will not raise rates this cycle and that it is more likely the next move will be a cut as early as late this year.  With concerns about the impact of a weakening property market on consumption levels, the prospect of tighter lending standards by banks in the wake of the Hayne Royal Commission, together with our trade dependency on the weakening Chinese economy, interest rates in Australia will not be going up anytime soon. 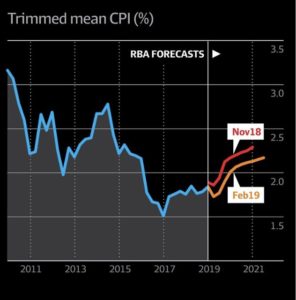 Markets not out of the woods yet

Despite the positive tone so far in 2019, there are still risks that we need to be cognisant of. While there have been positive announcements about the progress of trade talks between the US and China ahead of the 1 March deadline for further tariff increases, the devil may well lie in the detail of any deal. We expect that China will commit to buying more US agricultural exports as a means of reducing the trade deficit, however, a resolution on the more structural issues such as forced technology transfer, theft of intellectual property and cyber espionage may well prove more problematic. It remains to be seen what kind of trade deal will appease the market, however, a “no deal” and further increases in US tariffs on Chinese imports will be unequivocally negative.

Outside of the US, economic conditions are not as rosy, especially in China where the government has introduced a number of stimulatory measures to bolster growth. The problem is that these measures are adding to the debt burden already plaguing the economy. The challenge for the Chinese authorities is to manage the deleveraging of the economy while still maintaining their targeted level of growth. The European economy has been slowing for some time, especially in the manufacturing hub of Germany. The conundrum for the ECB is how to normalise liquidity conditions against the backdrop of a weakening economy. Adding to the uncertainty on the continent is the messy situation regarding the UK’s “Brexit” from the European Union. British Prime Minister Theresa May is finding it difficult to strike a deal that is acceptable to both the European Commission and the British Parliament while consistent with the 2016 UK referendum. With the March 29 deadline to exit the EU looming, it is hard to fathom what the ultimate outcome will be which is casting a pall of uncertainty over financial markets in the region.

As we often emphasise in these reports, we take a strategic approach to setting the appropriate asset allocation strategy for our clients. We look though sentiment driven market noise, preferring to focus on the fundamentals that ultimately drive markets over longer term periods. Our objective is to always strike the appropriate balance between risks and opportunities. In response to elevating risks over the course of 2018, we took steps to de-risk diversified portfolios by reducing exposure to equities in favour of more secure assets such as government and corporate bonds. The change in the monetary policy stance in the US and Australia is a good example of a change to medium term fundamentals which will provide good support for risk assets such as shares. Prior to this development, our bias was to further de-risk portfolios, however, as a consequence of this development we are much more comfortable with the equity positions we currently hold.

While government bonds are often viewed as a staid and boring asset, they provide a high degree of security and excellent mitigation against the higher risks of holding equities. With the RBA unlikely to raise rates this cycle, the outlook for bonds has improved, further enhancing their appeal in a diversified multi-asset portfolio. With the AUD often considered a risk proxy currency, a healthy exposure to foreign currency, especially the USD, also provides excellent risk mitigation.