News
Themes For January
The Australian share market stormed out of the gates in 2020 leading the developed world by posting an impressive gain of 4.7% building on its strong performance in 2019. The US market was essentially flat however technology shares faired a little better propelling the NASDAQ 2% higher. The spread of the coronavirus spooked Asian markets in particular with Hong Kong feeling the brunt - down 6.7%, and mainland China falling 2.3% (also falling sharply in early February). Despite the UK Parliament formalising its exit from the EU, the UK market was 3.4% weaker while Europe declined 1.9%. Investors took refuge in government bond markets pushing the Australian 10-year yield down 42bp with US Treasury yields also lower. The prospect of economic weakness in China pushed the AUD down 4.8%, while commodities were hard hit with oil down 16.4% and copper 9.5% weaker. The lower currency together with marginally stronger employment and slightly higher inflation provided enough cover for the RBA to keep cash rates on hold at 0.75%. 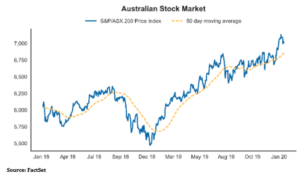 The coronavirus has put markets on edge

The loss of life and rapid spread of the coronavirus is above all a human tragedy. While the disease is centred in the Chinese city of Wuhan in the Hubei province, there are now cases reported across most parts of the world (including Australia) and it has been declared an “international public health emergency” by the World Health Organisation. While China has gone to extraordinary lengths to quarantine around 11 million people in the affected area, the extent to which the virus will spread outside the mainland is unclear, although air travel restrictions are an important containment measure. It is also very likely that the number of declared cases and deaths in China have been understated.

With 2/3rds of the Chinese economy effectively shut down, it is understandable that markets have reacted negatively. The most recent example of a similar event was the SARS outbreak in 2003, also originating from China. SARS had a higher mortality rate but did not spread as fast as the coronavirus has thus far. While it is impossible to accurately predict the course of the disease, past experience tells us that with swift containment, the number of cases will plateau in the first few months and that the worst fears are not usually realised. There is no doubt this will have a sharply negative impact on Chinese GDP, which could be curbed by 2-3% in the current quarter.

Given that 20% of our tourism is sourced from China and that tourist flights are now suspended, the impact on Australian GDP is likely to be around -0.2% in the March quarter. Adding this to the effect of the devastating bushfires and drought, Australian GDP is likely show a contraction in the March quarter. While it is reasonable to expect a rebound in the June quarter as these factors reverse, the RBA’s growth expectation of 2.75% implies an improbable rebound in the final three quarters of the year. This will prompt further rate cuts later in the year especially if employment growth fails to meet expectations.

Markets continue to set new records propelled exclusively by low interest rates and easy liquidity conditions. The strong US economy will likely keep the Fed on hold for much of the year, particularly as they will be reluctant to intervene in the hyper partisan political environment as the November Presidential election approaches. The European Central Bank, Bank of Japan and Bank of England should all maintain expansionary settings in 2020. While it was a mild surprise the RBA did not cut rates in early February, we still expect them to lower rates at least once (and probably twice) before the end of the year. Following three 0.25% cuts last year, the RBA decided to adopt a wait and see approach to assess their economic impact in concert with tax cuts and a lower AUD. With property prices on the rise again, they are mindful of not engineering another asset price bubble and remain hopeful that housing construction and consumer spending will drive growth in coming months.

As reported last month, the missing ingredient from the current share market rally is profit growth. The current US reporting season for Q4 2019 profits is very illuminating. Despite the back drop of a supportive economy and a boost from corporate tax cuts in 2018, earnings continue to decline pushing P/E ratios to a lofty 18.4 times forward earnings. As the chart below depicts, earnings per share for S&P 500 companies has fallen in all but one of the past 20 quarters, with the one positive month a direct consequence of the corporate tax cut.

The current environment underscores the need to be disciplined in maintaining a prudent diversification of risk across asset classes. While the tail wind from interest rate cuts and easy liquidity has moderated, it is still supportive. This effect will only reverse once we have seen the emergence of higher inflation which will provoke higher interest rates. It is difficult to see this emerge anywhere in the world during 2020. Against this, strong market performance and the anaemic profit growth outlook does not afford investors much risk buffer to protect against unforeseen events such as the coronavirus.

We are reluctant to commit further capital to share markets until there is more convincing evidence that stronger profit growth will be delivered in 2021. While Australian and international shares should still provide better returns than more defensive alternatives, nominal returns will almost certainly be lower than in 2019. We are maintaining a healthy allocation to Australian and international shares in multi-asset portfolios counterbalanced by downside protection from Australian and US government bonds, corporate credit securities and foreign currency.