News
Themes For July
The Australian share market built on its June post-election gains, to once again lead the world’s major developed markets. Buoyed by a second 25 basis point interest rate cut by the RBA and the passage through parliament of the re-elected Morrison government’s personal income tax cuts, the local market improved 2.9%, driven by consumer staples and healthcare stocks. The Australian market is now up close to 25% since late 2018 and approaching its all-time high.

The US market improved 1.3% on expectations of a rate cut by the Fed (ultimately delivered late in the month) in addition to strong employment data. Optimistic second quarter earnings expectations buoyed the tech sector with heavyweights such as Apple, Intel and IBM leading the way. The UK market improved following the Conservative Party’s election of former London mayor and Brexit hardliner Boris Johnson as the new Prime Minister, who has committed that the UK will leave the EU by no later than 31 October, even without a formal deal with the EU. Bond markets once again rallied as global central banks continued their easy monetary policy stance. Following the RBA’s cut, Australian 10-year bond yields fell 18 basis points to 1.18% to be 83 basis points below its US counterpart. The lower interest rate outlook also put pressure on the AUD, which fell to below US69c providing further trade stimulus to the local economy.

Share markets have once again been rocked by the prospect of an escalation in trade hostilities between the US and China. Following the lack of progress from a recent US trade delegation to China, President Trump decided to up the ante by announcing a new 10% tariff on the remaining $US300 billion of Chinese imports not currently subject to tariffs, to be implemented on the 1st of September. 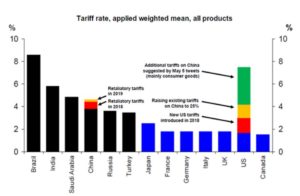 China responded by suspending US agricultural imports and devaluing the Yuan to partially offset the competitive impact of the new tariff. This prompted the US to formally label China a “currency manipulator” (a breach of WTO rules) further antagonising the Chinese government. Equity markets fell sharply in reaction to this news, fearing a negative impact on growth in an already slowing global economy. This news fuelled a massive rally in global bond markets and a yield curve inversion in the US, sometimes the harbinger of a recession. In many ways we have seen this movie before; President Trump uses the threat of tariffs as a blunt negotiating instrument only to become more conciliatory as the deadline approaches. This time seems to be a little different however as the Chinese appear to have stiffened their resolve, possibly resigned to waiting out the balance of President Trump’s term and hoping for the election of a more dovish Democrat President in late 2020.

Another twist to the story is that the announcement of the new tariffs came hot on the heels of comments by Fed Chairman Powell suggesting that further escalation in the trade war may trigger additional interest rate cuts. This raises the suspicion that President Trump may be playing a Machiavellian game of chicken with the Fed to force them to cut rates. The US President has been a vocal critic of the Fed’s rate increases and quantitative tightening in 2018, which he contends has led to a strong USD and stifled growth. President Trump can be erratic with his tendency to announce policy by tweet, but he is a pragmatist and well aware that his re-election prospects are contingent on maintaining a strong economy into 2020.

The uncertainly over the global economy as a consequence of both the trade war, economic stagnation in Europe and Japan and the on-going uncertainty surrounding the Brexit saga, leads us to conclude that growth will moderate over the balance of 2019. As a consequence of this, profit growth is likely to be tepid and not the short-term driver of share prices. The counter balancing force is that central banks are now acting in unison to cut interest rates and ease global liquidity conditions, which will continue to support equity valuations. Our conclusion is that while a slowdown is likely, a global recession is not. In this environment, nominal returns are likely to be lower but still favour equities as they will benefit from the eventual recovery engineered by the current policy stimulus. As always, we will continue to be vigilant in maintaining a well-diversified portfolio, seeking the appropriate balance between risk and opportunity.