News
Themes For March
Volatility was the order of the day during March as markets experienced a roller coaster ride, finishing well in the red by month’s end. The possibility of a trade war between the US and China was the primary catalyst for the market’s decline as investors became concerned about the ramifications for global growth. In addition to this, the US technology sector took a hit from revelations about misuse of personal data by Facebook, the likely outcome being more regulation of social media platforms. Major equity markets all finished lower with the US down 2.7%, Japan & China 2.8%, Germany 2.7% and the UK 2.4%. Australia was one of the worst performing markets falling 3.8% with financial stocks hit by mooted changes to imputation credit refunds by the opposition Labor party and negative sentiment surrounding the Royal Commission enquiry into the banking sector. Commodities were generally weaker due to the trade war fears with iron ore harshly dealt with, falling 16.8% on forecasts of lower Chinese steel production. Amongst the base metals, aluminium fell 6.5%, nickel 3.7% and lead 4.1%. A bright spot was oil, which rose 5.4% on reductions in US inventories and Russian compliance with OPEC supply quotas. The “risk-off” market mood saw investors flock to the safe haven of government bonds with the yield on US 10 year paper falling 12bp to finish at 2.74% and their Australian counterparts 21bp lower at 2.60%, producing positive returns in both cases.  As expected the US Federal Reserve raised cash rates by 25bp in a move that was largely telegraphed and had little impact on the short end of the yield curve. US cash rates are now above Australia’s for the first time in many years. Hawkish commentary from the Fed indicated there may be up to three more hikes of a similar magnitude this year. Not surprisingly, the AUD suffered from the risk aversion and commodity price weakness, falling 1.3% against the USD, 2.8% against the GBP and 2% against the EUR. As the negative interest rate gap with the US widens, expect to see the AUD further depreciate back towards US 70c over time.

Potential Trade War – what are the risks?

A review of US trade agreements was always part of the election platform of President Trump, with China squarely in his cross hairs given a $350 billion trade deficit between the two countries. In addition to this, the President called for a renegotiation of the NAFTA trade agreement with Mexico and Canada and pulled out of the Trans Pacific Partnership free trade agreement which Australia has committed to. The US/China trade deficit simply reflects the fact that the US purchases more goods and services from China than it sells to them. As a consequence US consumers benefit from low cost imports but on the downside this may hurt US import competing businesses. Trade wars generally have no winners, as they tend to restrict the overall level of global trade and therefore constrain economic growth and add to imported inflation. There is no reason why any country must necessarily have a balanced trade account with any other country, in fact the US runs a trade deficit with almost every country. While free trade is the ideal outcome, it also must be fair. The complaint of the US (and indeed many other countries) is that China for a long time has engaged in unfair trade practices including subsidising the cost of production for key exports like steel and aluminium and the theft of intellectual property rights with respect to technology.

The US is rightly concerned about the emerging Chinese technology sector providing a threat to its own Silicon Valley giants. Despite global concerns, most countries were willing to turn a blind eye to China’s trade practices to assist in their development into an emerging economic power. Countries like Australia have been enormous beneficiaries from China’s industrialisation, particularly with respect to their demand for our iron ore and coal. 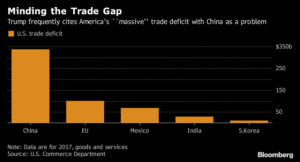 President Trump’s first response was to announce the imposition of tariffs of 25% on steel and 10% on aluminium although later diluted this by exempting strategic partners such as Australia. The next phase was a more targeted strategy focusing on tariffs on $50 billion of Chinese imports to which China swiftly responded in kind with their own $50 billion tariff announcement on US goods. Not to be stared down, the US responded by doubling down by increasing the range of Chinese imports to $100 billion. It is important to note that as yet, no tariffs have been actually imposed by either country which indicates these are the opening salvos in a negotiation process.

The one thing we have learned about President Trump’s negotiating style is that he likes to make a dramatic first move designed to shock and awe, and then negotiates more towards the middle. It is likely that this will be the case with these trade negotiations, which are not likely to have a material impact on the global economy and therefore should not have a lasting detrimental impact on financial markets.

An end to imputation credit refunds?

The Federal opposition Labor Party announced during the month a controversial proposal to eliminate the refund of excess imputation credits from Australian dividends, effectively negating the policy implemented by the Howard government some 18 years ago. It believes the proposal will accrue a saving of $5 billion to help close the existing budget deficit. The policy appears to be targeted at the self-managed super funds of high net-worth individuals with large account balances, but on closer examination will hit a large number of self-funded retirees especially in the zero tax pension phase that rely on imputation credit refunds to augment their retirement income.

If implemented, this will cause significant disruption for investors who have designed investment strategies that comply within the existing tax framework. While later announcements have provided some exemptions for pensioners, the proposal overlooks the budgetary savings that accrue from self-funded retirees not drawing pension entitlements. A key objective of the superannuation system in an ageing population demographic is to encourage self-sufficiency and provide incentive for people to not have to rely on the public purse to fund their retirement.

When would this take effect?

Labor have announced a start date of 1 July 2019 meaning investors would not receive a tax refund for excess credits received in the 19/20 financial year. We consider this timetable to be highly optimistic. Firstly, if the current parliament runs its full term then the next Federal election will not be held until late in 2019. Assuming Labor win (no certainty), then legislation would be introduced into the lower house in the first half of 2020, possibly as part of their first budget in May. While passage through the lower house would be a formality (assuming a majority government), to become law it would need to be navigated through the Senate, which would almost certainly still be captive to the minor parties given that only half the Senate is up for election. This would be no easy task as is evidenced by the difficulty the current government is facing to get company tax cut legislation passed though the upper house. There is also growing opposition from self-funded retirees, which is a large and vocal voting block whose opinions would influence the minority parties and independents.

Assuming that it does pass the Senate, it would not likely become law until the second half of 2020, so to apply this from 1 July 2019 would make it retrospective, something once again the Senate would take issue with. It is generally considered taboo to retrospectively apply tax policy as investors are entitled to rely on existing laws in making their investment decisions. A more likely start date is 1st July 2020 meaning that investors would not get cash refunds for excess imputation credits in the 20/21 financial year. As this would reduce the value of Australian dividends you would expect to see investors reallocate assets to other sectors especially international shares and possibly REIT’s (real estate investment trusts). The share prices of high yielding, franked dividend paying Australian companies such as the Banks and Telcos would likely see falls in the lead up to the legislation being passed.

The benefit of our strategic approach to asset allocation is emphasised during periods of volatility. By focusing on medium term fundamentals, we avoid getting whipsawed around from trading excessively in volatile markets driven by sentiment and market noise. It is incredibly difficult to successfully tactically shift between markets in volatile times. More than likely, this approach will both erode capital and incur unnecessary trading and tax costs for investors. In the words of the legendary founder of Vanguard, John Bogle:

Our approach emphasises a medium-term time frame, which means we look through the short-term smoke and haze to focus on the longer-term path markets are taking. Our approach is therefore strategic but also active, so where there is a material change to the fundamentals that drive markets over the medium-term we will make meaningful changes to both enhance returns and where necessary protect capital.

In the past few months we have seen volatile markets trade somewhat erratically based on the fear of what might happen as opposed on what is actually likely to happen. In times of negative sentiment, investors attach an unrealistic probability to virtually every negative market scenario. The market has climbed a wall of worry since early February, with concerns including rising inflation, trade wars, political risk in the US and geopolitical risks from North Korea and Syria. Our strategic approach carefully assesses the impact of these events on the fundamentals that drive markets over the medium term such as real GDP growth, inflation, interest rates, currencies, corporate profits and of course valuations. This approach ensures that multi-asset portfolios are appropriately diversified with a bias towards assets that offer attractive returns with acceptable levels of risk.