News
Themes For March
Following the strong returns delivered in the first 2 months of this year, markets consolidated during March with shares in major regions closing slightly higher. The V shaped recovery so far this year has been impressive and virtually all the losses suffered in the closing months of 2018 have now been recouped. The US improved by just under 2% driven by the rosier interest rate outlook provided by the Fed, Europe advanced by 1.3% mainly due to a stronger French market as the region’s largest economy Germany is teetering on recession pushing shares down 0.7%. The UK rose 2.4% on optimism the Brexit saga would finally be resolved while China rose 3.2% on hopes of a resolution to the trade war with the US together with some encouraging manufacturing data. In Australia, our market edged just 0.7% higher propelled by a stronger resource sector fueled by higher commodity prices while the bond rate sensitive Real Estate Investment Trust (REIT) sector was the stand out, posting an impressive 6.2% gain. Bond markets caught fire during the month reflecting the change in the monetary policy outlook for the world’s major central banks. Australian 10 year bond yields fell by 33bp to finish the month at a record low yield of 1.78% while in the US 10 year treasury yields fell 31bp to close at 2.41%. The AUD has proved stubbornly resilient hovering around 71c against the USD with the positive impact of a stronger iron ore price offsetting the negative effect of a forecast widening interest rate differential between Australia and the US.

Flight to safety ignites a rally in bond markets

While the sharp rise in share markets captured most of the headlines over the March quarter, it was the huge rally in global bond markets that has perhaps been the most significant financial market event so far this year. The dovish about-face in the policy stance of the world’s major central banks has given investors pause about the real strength of the global economy. The US Federal Reserve has put policy on hold and is unlikely to raise rates at all this year, the European Central Bank extended its pledge on record-low rates while providing cheap funding for banks and China has introduced multiple fiscal and monetary stimulus measures to revive growth impacted by the trade war with the US. 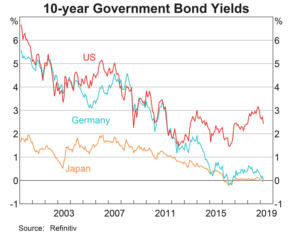 In the US, 10-year bond yields fell below the 3-month rate for the first time since 2007 just before the onset of the GFC. The inversion of this section of the yield curve is sometimes seen as the harbinger of an oncoming recession. The scramble for the safety of bonds has pushed German and Japanese bonds into negative territory, meaning investors are actually willing to lose money for the luxury of the capital security they provide. As reported last month, the slowdown in the Australian economy has fueled expectations that the RBA will be forced to cut cash rates by up to 0.5% before the end of 2019. This change in interest rate expectations has seen sharp falls in Australian Government Bond yields, which delivered a return of 3.4% over the March quarter and 7.2% over the past 12 months. These returns highlight the value of high quality fixed coupon securities in a falling interest rate environment. As the yield on a fixed coupon bond falls, the capital value of the bond rises. The longer the maturity of the bond, the greater is the change in the capital value.

Just 3 months into the new calendar year, we find markets at an interesting juncture. The fear and negative sentiment about global recession that consumed markets late last year has been replaced by a sense of renewed optimism driven by easier liquidity than previously expected. As has so often been the case since the GFC 10 years ago, central banks around the world have stepped in to bail out markets the moment signs of excessive volatility and panic set in. With equity markets now roughly back to where they were prior to the sell-off in the last quarter of 2018, where we go from here is a finely balanced equation. As economic growth continues to moderate around the world, the outlook for profit growth remains constrained which should limit the upside potential for equities. On the flip-side, easier liquidity and lower bond yields provides valuation support for shares, so while earnings growth is falling, the multiple of earnings that investors are prepared to pay has risen.

In designing the right mix of assets in a multi-asset portfolio, riskier assets such as shares must offer the prospect of returns above lower risk assets such as bonds by a margin known and the “equity risk premium” or ERP. In our judgment, while equities should still outperform bonds over the next 12 months, the margin of outperformance should be roughly in line with the ERP. As a consequence we are maintaining a strategy of holding a broadly diversified mix of equities and defensive assets to both capture available returns while protecting capital.