News
Themes For May
Despite persistent political uncertainty and geopolitical tensions, most global share markets posted modest gains over the month. The notable exception was the Australian market which fell 2.7% following a Federal budget that failed to inspire confidence and included a 0.6% bank levy which precipitated a 9.8% fall in the market’s largest sector. Elsewhere, the US market scratched out a 1.4% gain while Europe improved 1.6% following the French election, which allayed concerns about a further fragmentation of the European Union with the election of the centrist Emmanuel Macron. The UK market was up a healthy 4.9% while Japan improved 2.4% on the back of a stronger JPY and solid retail sales. The Australian bond market continued to rally with 10-year bond yields falling 19 basis points as softer economic data is raising the possibility of another rate cut before year’s end. In commodity markets, iron ore continued its recent weakness falling a further 17% while oil was 2% lower. The AUD slipped 1.2% against the greenback and a hefty 4.2% against a stronger EUR.

The Australian economy continues to struggle

The Federal Budget handed down in early May failed to provide any real short term stimulus to an economy struggling to rebalance following the end of the mining boom. The government’s commitment to returning the budget to surplus by 2020/21 is limiting their ability to inject short-term fiscal stimulus measures such as badly needed tax cuts. Australia now has one the highest and most progressive personal tax rates in the world, constraining the ability of consumers to increase spending especially in light of the leverage of household balance sheets to the property market. The assumptions used in the projections, especially revenue growth of 6.7%, are highly optimistic and unlikely to be achieved. The precarious state of the Senate makes the passage of meaningful legislation very difficult which is why the 0.6% levy imposed on the major banks was an unimaginative but politically palatable revenue raising measure. The $75 billion commitment to spending on longer term infrastructure projects such as the second Sydney airport and the Melbourne-Brisbane rail link are welcome initiatives, as they will enhance the economy’s long-term productive capacity. 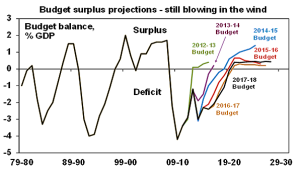 The March quarter National accounts highlighted the problem for the Australian economy. Growth for the quarter came in at a tepid 0.3% bringing the annual growth rate to just 1.7%, down from 2.4% from the previous quarter. Private consumption is the growth engine for any economy and accounts for around two thirds of GDP. With wages growth running at just 1.9% per annum and household balance sheets leveraged to the housing market, consumers simply do not have the fire power to boost consumption. The chart below shows just how sluggish retail sales have been with the annual growth rate falling steadily for the past 3 years. A fall in the household savings ratio from 5.1% to 4.7% shows that spending is increasingly being funded from savings rather than income.

Increasingly, we are relying on external factors such as a stronger global economy and an improved terms of trade from higher commodity prices to boost growth. In the March quarter, net exports clipped 0.4% off growth due to weaker iron ore and coal shipments. Housing investment has been a driving force in the economy in recent years however this fell by 4.4% in the quarter possibly reflecting tighter prudential controls introduced by APRA on bank lending for investment properties. The sluggish nature of recent data must bring the prospect of a further rate cut back to the table despite concern about re-igniting property prices which are showing early signs of cooling. Failing this, a substantial fall in the AUD would engineer a similar easing of monetary conditions and boost the tradable goods and services sector. There’s no doubt the RBA would prefer the latter which is becoming increasingly likely as the interest rate differential with the US closes and bulk commodity prices continue to retreat from recent highs.

As articulated in recent months, we are positive on the long-term outlook for equities and believe they are likely to offer superior returns compared to other asset classes over the next 12 months and beyond. Given the sanguine outlook for the Australian economy however, the performance of the local market is likely to be constrained by a softer earnings outlook for companies linked into the Australian economy. This includes large sectors such as banks, telcos and retailers. Conversely, the best performing stocks listed on our market are more dependent on offshore activity for earnings growth with Aristocrat Leisure and CSL being prime examples of this. As a consequence, we have decided to further reduce the exposure to Australian equities in diversified portfolios while maintaining the same overall weighting to equities in aggregate.

With the AUD likely to fall in coming months, it also makes sense to increase the weighting to foreign currency to generate the potential for windfall returns in the event of a depreciation in the AUD. While US equity valuations are now quite full following a 15% rise since the Presidential election in November 2016, the standout region in our opinion is Europe. Recent leading indicators such as the manufacturing Purchasing Managers Index has risen to its highest level in 6 years while surveys of business and consumer confidence are pointing to a stronger growth outlook. The Eurozone economy is still being fuelled by very expansionary monetary policy settings by the ECB including close to zero cash rates and Quantitative Easing of $60 billion EUR per month for the remainder of the year at least. The European political landscape has recently improved with the prospect of further disintegration of the EU following Brexit now fading following the election of pro-EU candidates in France and the Netherlands. With market valuations and earnings growth prospects superior to other major markets, we have decided to increase the weighting to the European region by way of an iShares ETF that tracks the major European market index.