News
Themes For November
November saw a mixed month for equities with Australia finishing down under one percent, and varied returns for other markets. One of the key features of the month was a resumed pull back in the prices of oil and iron ore. Despite this the AUD managed a small rally as we saw some more positive data points and the RBA seems content to take a wait-and-see approach for the time being. Ten year bond yields rose in Australia and the United States. In the US traders are now pricing a greater than 70% chance that the Fed will raise interest rates finally in December. Strong data from the US certainly supports stance. We expect they will most likely lift rates, but will stress a gradual pace of increases, as we have been suggesting for some time now. Whilst there may be volatility around the Fed meeting next month it would not be surprising to see a relief rally in markets as the event is finally delivered after all this time waiting.

Returns for the month of November:

Australia – Turning a Corner?
The big data point for Australia last month was the employment gain of 58,600 jobs, including 40,000 full time jobs, a high quality number. This was the largest print in a number of years, and much higher than expectations of a 15,000 gain. The gain was also accompanied by a drop in the unemployment rate from 6.2% to 5.9%.

However as we have seen in previous months this number can be volatile, and the ABS has yet to repair its reputation after recent mishaps. Indeed employment growth of 2.7% year-on-year seems to be running ahead of leading job indicators such as the NAB employment intentions survey, though having said that the survey has also ticked up. 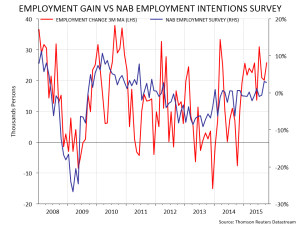 Still we must consider the possibility that perhaps the Australian economy really is doing better than feared, though this is coming off a base of low expectations. Another important data point, with a more mixed result, as the capital expenditure (capex) survey data released by the ABS. The June quarter capex forecast put 2015-16 spending at $115bn, a 23.4% decline from 2014-15. The September quarter update saw the total 2015-16 forecast upgraded 4% to $120bn, which was somewhat in line with market expectations. However the market focused on the quarterly drop in capex of 9.2%, which was the worst quarterly fall on record. Mining investment was down 10.4% and non-mining capex fell 8.2%. On the bright side manufacturing capex was up 6.9%, clearly the lower AUD is benefitting that sector. And keep in mind that this report also does not include such industries as health, agriculture, and education which are also benefitting from the low AUD.

We still remain cautious on Australia. But if employment does manage to hold up, representing more than a statistical blip, and if capex does improve, that would lead us to turn more positive on the region.

United States – Employment Bounces Back
Last month one of the key data points was US payrolls which came in far under forecasts. This month we saw a large rebound with a massive print of 271,000 jobs added. This compared to forecasts ranging from 75,000 to 250,000. The jobless rate remained at 5%, though with labour participation stuck at the lowest levels since the 1970s. This number moved the likelihood of a December rate hike to more than70%.

Importantly worker pay increased 2.5% over the 12 months to October, the most in six years. This followed a 2.3% gain the prior month. We remain optimistic for US wages. We have used the chart below in previous reports, but have updated it again below. The red line shows the percentage of firms expecting to raise rates going forward, with the data series shifted forward one year. The other lines show actual wage gains. Clearly it looks like wages should continue to rise.

This has yet to feature strongly in actual US inflation. Consumer prices rose 0.2% last month after two months of decline, bringing the total price index gain to 0.2% for the 10 months to October. However wage inflation should feed in to headline CPI in the future.

In other news US manufacturing output was up 0.4% last month, also rebounding from contraction. And third quarter GDP was upgraded to 2.1% from the initially reported 1.5%. Better business spending on inventories than initially reported was largely behind the drive, this was upgraded from -1.44% to -0.59% of GDP. Though this could mean a softer figure for the current quarter it seems that all the data points, and indeed the Fed itself, are pointing towards a December rate rise.

We encountered two striking facts concerning China during the month. The first, perhaps unsurprisingly, concerned debt levels. Hua Chuang Securities estimate that Chinese company borrowing to pay interest will rise 5% this year to a total of US$1.2 trillion. That represents 45% of new debt, though that ratio is down from 50% last year. This and the related overcapacity remain the key risk for China, it is stunning that nearly half of all borrowing is undertaken to pay existing interest costs.

The second fact we encountered was that China’s consumers are on track to spend $116.8 billion on luxury goods this year, 46% of the world’s total. Also a stunning figure, and reinforces how important it is for luxury good companies to get it right in China. However few of the sales will benefit the country’s retailers, according to a report by the Fortune Character Institute. Of the total global luxury consumption this year, 78% will take place outside China, the report said.

Once again about one third of Eurozone government bonds, about US$2 trillion worth, have yields that have dropped below. The latest rally comes after the ECB has basically told the market that it will act again in December. Two year yields on notes from Germany, Austria, and the Netherlands have all dropped to record lows. If the ECB doesn’t act there will be blood.

Discretionary Portfolio Changes
In the Australian portfolio we executed the following trades:

In the International Value portfolio we executed the following trades: