News
Themes For October
Investors breathed a sigh of relief in October as returns from global share markets were solid in a month which has historically seen some of the most dramatic sell-offs in history, headlined by the market crashes in 1929 and 1987. Sentiment for the month see-sawed as news ebbed and flowed concerning the “twin horseman of the apocalypse” being the US-China trade war and the on-going Brexit saga. Japan led the way up 5.4% on optimism that its export-oriented economy will benefit from a trade war resolution. The US market was up 2% with the NASDAQ fairing better, advancing 3.7%, as the Federal Reserve cut rates by a further 0.25% as expected late in the month, but signalled it may now pause to assess the impact on the economy of its 0.75% reduction in rates so far this year. Europe advanced 1.9% but across the channel the UK fell 2.2% as PM Boris Johnson failed to get parliamentary approval for his EU negotiated Brexit deal which has now triggering a general election on December 12 as the next step to resolving the impasse. The Australian market was basically flat despite strong returns from health care stocks CSL, Resmed and Ramsay Health Care offset by weakness in the gold sector which fell sharply for the second consecutive month. Bond markets were generally weaker as yield curves turned positive once again allaying recession fears with US 10-year bonds up 11 basis points to 1.77%, while in Australia 10-year yields rose 9 basis points to 1.11% as expectations of a Melbourne Cup Day rate cut were dashed. The AUD rose 2.2% against a weaker USD to finish at a 3-month high of close to 69 cents.

Tax relief and interest rate cuts, but where to now for the Australian market?

The Australian market has performed well this year boosted by tax cuts and the preservation of franking credits following the re-election of the Morrison government in May, together with three 25 basis point interest rate cuts by the RBA. Indeed, the performance of the local market has been credible so far this year, returning 18.6% comparing favourably to the US 21.2%, Europe 18.9% and well ahead of Japan 14.6% and the UK 7.7%.

In an environment of record low interest rates, the Australian market’s high yield characteristics have attracted support especially from local tax paying entities that benefit from franking credits. Falling bond yields have compressed the earnings yield on stocks and elevated Price to Earnings (P/E) ratios to historically high levels. It is likely we will see cash rates further reduced from their current level of 0.75% to 0.25% in coming months as the RBA continues to press towards its policy objective of stimulating employment growth as a means of boosting wages and therefore inflation which has remained persistently below the lower end of its 2-3% target range. 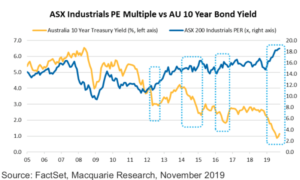 While low interest rates will support the share market, a recovery in corporate earnings is necessary to further extend the bull market rally. To this end, earnings from local companies have been disappointing especially industrial stocks which are more sensitive to the domestic economy. Forward earnings estimates for industrials have persistently declined in calendar 2019, which has pushed the P/E for the sector to around 22 times, well above other developed markets. Companies that are more exposed to the international economy such as mining stocks and globally focused industrials, enjoy a more favourable earnings outlook. While much is made of the importance of our trade linkages to China, it is consumer behaviour that is much more relevant to the health of the economy. Sluggish employment growth and tepid wage outcomes have combined to suppress consumer activity as has been evident in recent retail sales numbers.

While tax and interest rate cuts in theory should have been a fillip to the consumer, evidence to date is that these savings have been used to reduce debt rather than fuel spending. For this reason, talk in the financial press of the RBA implementing a form of quantitative easing in Australia will be of little economic benefit and may only serve to further fuel asset prices. 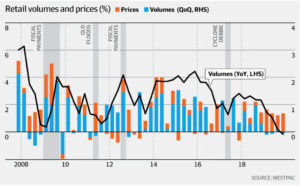 On the positive side there has been some good news in the local property market as prices have risen in response to recent interest rate cuts. While this has a positive wealth effect on consumption, of more significance are building approvals which have a strong multiplier effect though the broader economy. While building approvals remain in the doldrums, the good news is that as the price for existing housing stock rises, the greater the incentive to build new dwellings. 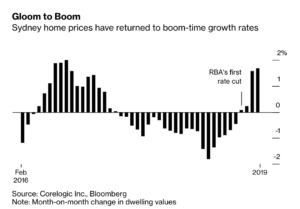 While sentiment has improved recently as a consequence of better trade news, we are far from convinced about the substance behind this especially as both sides can’t seem to agree on the details. The “Phase 1” trade deal that has been mooted appears superficial and does little to stimulate global trade. The best case appears to be that this includes a wind-back of tariffs imposed so far by both sides. The longer-term structural issues are nowhere near resolved and unlikely to conclude this side of the US presidential election in November 2020.

While we continue to believe that low interest rates and easy liquidity will provide support for share prices, we need to see more tangible evidence of earnings growth before committing more heavily to equity markets in multi-asset portfolios. We are more sanguine about the earnings outlook in Australia and as a result hold a preference for global equity markets. While bond prices have fallen of late, we continue to value their diversification qualities and may use the short-term weakness to lengthen the duration of the bond portfolio.