News
Themes For October
Equity markets staged a solid comeback in October after a period of retrenchment in the preceding months. Many equity markets outside Australia were up between 7 and 10 percent, whilst the Australian market managed a 4.4 percent return. This rebound was largely driven by a shift in sentiment, evidenced by the VIX index which declined 38 percent over the month, and is down 63 percent from its August peak. The VIX index is a measure of expected risk as priced by the US equity option market. Structurally the world still looks fairly similar to how it looked in September, though the market did take heart in the Fed leaving rates on hold, the Chinese central bank providing further support, and the ECB indicating further stimulus may be forthcoming. Perversely, as fears reside and markets recover it does perhaps make it more likely that the Fed will finally raise rates in December.

Emerging Market Outflows:
Capital outflows from emerging markets are on track to exceed inflows this year for the first time since 1988 amid concern that a slowdown in China, and a currency selloff and higher interest rates in the US will make riskier assets less attractive. Investors are estimated to pull $540 billion from developing markets in 2015, according to the Institute of International Finance. The IIF estimate that foreign inflows will fall to $548 billion, about half of last year’s level and below the amounts recorded during the financial crisis in 2008. This would represent 2 percent of GDP, down from a record of about 8 percent in 2007. At the same time, local outflows are accelerating amid heightened market volatility, pushing net flows into negative territory. In addition to this, according to the IMF the corporate debt of non-financial companies in emerging markets has surged to more than US$18 trillion last year from US$4 trillion in 2004, with around one third of issuance in US dollars. Fears of an emerging market credit bust are likely to persist as the Fed starts raising rates. 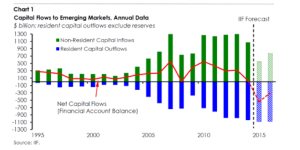 China Goes for Growth
Whilst China looks set to downgrade its economic growth forecasts for the medium term, in one respect it is trying to push growth higher, the birth rate. China has run a one-child policy since the late 1970s to preserve a then-impoverished nation’s scarce resources. However now China has one of the fastest ageing populations in the world which, will place increasing strain on the workforce and government resources. Its working age population shrank last year for the first time in two decades. However it may be difficult to change the mindset of potential parents worried about the cost of expanding their families. A previous relaxation of policy in December 2013, which allowed couples that included at least one single child to have two children, only saw take-up by 1.1 million of the 11 million couples that were eligible. Whatever the socio-economic impact may be we would hope that these changes go some way to addressing the gender imbalance that features in China. 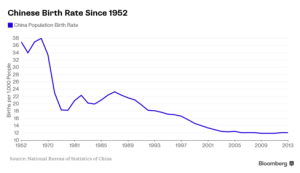 Chinese GDP Softens
China posted year-on-year GDP growth of 6.9 percent in the third quarter, which was slightly better than expectations of 6.8 percent. Industrial output grew at an annualised pace of 5.7 percent, remaining at low levels. Meanwhile early indications from China’s meeting on a five-year plan lack detail, but President Xi Jinping said 6.5 percent would be the target minimum for annual growth from 2016 to 2020. That pace, Xi said, would be sufficient to meet the Communist Party’s aim of doubling per-capita gross domestic product from 2010 by the end of this decade.

Looking closely at the GDP result for the third quarter, it is clear how much the figures were supported by 8.4 percent growth in the service sector, including a 10.9 percent gain in retail sales. Whilst this still represents a slowdown from recent years, the growth in retail sales is providing a bigger boost to overall GDP as its share of GDP grows. Consumer confidence also remains relatively high despite recent turmoil in the equity markets. 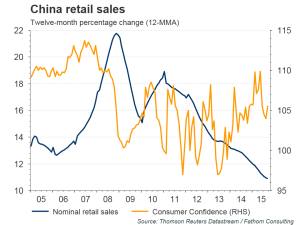 Meanwhile China’s growth in outstanding loans came to 15.4 percent year-on-year with M2 money supply up 13.1 percent with the addition of just over 1 trillion yuan in new bank lending, which beat expectations. Whilst a sharp slowdown in lending would be problematic for China and the global economy, we conversely find some concern in the amount that lending growth continues to outstrip GDP growth. We have previously highlighted that credit growth in China is a key risk to monitor. 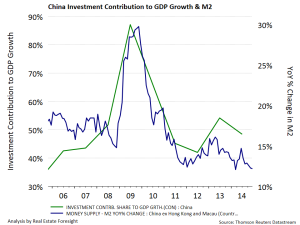 A Slow Quarter for the United States
Slowing growth was not solely an emerging market phenomenon in the third quarter. Growth in the US slowed to 1.5 percent, down sharply from 3.9 percent the preceding quarter. We would caution however that recent GDP figures have been quite susceptible to further amendment, 1.5 percent is a preliminary figure. Much of the drop in growth was due to businesses working down large inventories, which sliced off 1.44 percentage points from the growth rate and should be a transient factor. Indeed a robust 3.2 percent gain in consumer spending nearly kept pace with Q2’s 3.6 percent. Economists expect growth to pick up in the fourth quarter.

One of the other big data points for the month was US payrolls, which came in far below forecasts. In September only 142,000 jobs were added versus expectations of 200,000, and August’s figures were revised down to 136,000 from 173,000. In addition the participation rate fell to a 38 year low. 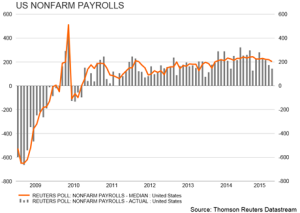 The Fed Waits
Markets took the employment data as evidence that the Fed would delay raising rates. However it is too early to call a new trend in what is a volatile series, and metrics such as the job vacancies to applicants ratio still point towards a healthy jobs market. At the Fed meeting in October it did, indeed, decide to hold rates at zero. However the market was perhaps surprised that policymakers still pointed towards a December rate rise as very much in play. The chance of a December rate rise moved to 50 percent from 34 percent just prior to the release of their statement. We continue to believe in the strength of the US employment market, and a likely rise in wage growth, which would likely prompt the Fed to start raising rates. What is less clear is what this will mean for markets, which may well rally as long as the forward language remains reasonably accommodative.

The RBA on Hold
The RBA kept its benchmark rate at 2 percent in October, but suggested that a cut could be in store if conditions merit one over the next few months. Indeed the inflation picture is turning softer, partly due to the inflationary effects of the currency drop dissipating over time. Consumer prices rose only 0.5 percent in the third quarter in Australia, bringing inflation for the year so far to 1.5 percent. Core inflation, which guides monetary policy, was up 0.3 percent for the quarter, 2.15 percent year-on-year. The pace is slower than expected, and is at the low end of the RBA’s target band of 2 percent to 3 percent. Furthermore the banks’ raising of mortgage rates has given the RBA some extra breathing room for a rate cut. We expect that more rate cuts are likely, though the RBA may wait some time to discern the impact of prior cuts.

The PBOC Cuts and the ECB Might in December
Whilst the RBA and Fed moves were broadly in-line with expectations the European central bank (ECB) and the Chinese central bank (PBOC) did provide markets with something of a surprise, though we had anticipated the move by the PBOC. First of all the ECB indicated that more stimulus is likely on the way in December as the  bank doesn’t have a “wait and see” stance and inflation has remained soft. The ECB is looking at lowering the deposit rate from minus 0.2 percent and other possible measures including expanding QE. Following the ECB, the PBOC lowered rates and the reserve requirement. Don’t forget that Chinese loan rates look quite high at around 5 percent when producer prices are shrinking at nearly 6 percent, they have now fallen for 43 consecutive months. It looks like central bank support for the markets is back as a thematic, this coupled with the swing away from risk aversion provided equity markets with a strong boost.

Will US Earnings Rain on the Sentiment Parade?
After a few months of sentiment / macro driven moves in markets, domestic fundamentals in the US will likely come to the fore again as we move through reporting season. Estimates from FactSet forecast a 5 percent decline in EPS and a 3.4 percent decline in revenues, with the latter figure being a key focus. Industrials certainly seem to be under pressure. Caterpillar reduced its profit forecast, citing weak demand for its heavy equipment, and 3M said it would lay off 1,500 employees, or 1.7 percent of its total, as sales growth sagged for a wide range of wares.

It should be noted that the last couple of quarterly reporting rounds saw similarly bearish expectations for the bottom line, though the final figures have been better. However this would be the third quarter of declining sales. In previous quarters companies have managed to maintain EPS growth by cutting costs, but there is a question over how long that can continue. It is true that much of the anticipated decline stems from the hard-hit energy industry, where sales are expected to drop by more than a third from a year earlier and profits are forecast to plummet 65 percent. But the absence of pricing power for companies across the board chimes with the message from low, long-term US Treasury yields. Inflation pressure remains moribund though we are on the alert for wage growth, which of course will impact the bottom line.

Discretionary Portfolio Changes
In the Australian portfolio we executed the following trades:

In the International Value portfolio we executed the following trades:

Accenture is one of the world’s leading management consulting, technology services and outsourcing organisations, with revenue in 2014 of $30bn. It has relationships with 92 percent of the Fortune Global 100 companies and 75 percent of the Global 500. It focuses on deep relationships with executive management, helping solve complex problems rather than simply being a cost-cutting agent. Of the company’s top 100 clients, 92 percent have been with Accenture for more than 10 years and 99 percent for more than five. Accenture has evolved its offering and preserved its relevance to clients. Activities related to data and analytics now represent 20 percent of revenue and are growing rapidly.

In terms of financials, in an end market growing at around 4 percent Accenture has generated underlying growth over the last couple of years at a 6-8 percent rate. This has included surprisingly strong growth in challenged end markets, such as commodities and Europe. Accenture last year earned an operating margin of 14.8 percent and its return on invested capital has been consistently above 40 percent. It has a net cash balance of $2.5bn and a modest net pension liability, and trades on approximately 22x trailing cash earnings. Our discount at purchase here of around 10 percent is smaller than we would normally seek. However, we have started with a small position which we intend to build should the valuation gap widen.

Please be in contact if you wish to discuss any of these themes further, or wish to make any changes to your portfolios.