News
Themes For September
Equity markets took a breather in September following recent strong gains with the US market down 3.9% due to concerns about congressional approval for additional stimulus and uncertainty about an orderly resolution to the upcoming US Presidential election. The Australian market followed the US lead, falling 4%, with healthcare the only major sector showing a positive monthly return. Other global markets were more subdued with the UK down 1.6% and Europe fairing a touch better down 0.8%. In response to the “risk-off” environment, the USD rallied against other major currencies with the AUD falling 3.2% against the greenback to finish around 71c at month’s end. The local unit was also not helped by the growing expectations that the RBA may soon cut rates from 0.25% to 0.1%. Bond yields fell over the month as investors sought refuge from the volatility in equity markets seemingly unfazed by supply concerns from record bond auctions to finance burgeoning government deficits.

What a difference a year makes! Last year’s budget was dubbed the “back in black” Budget which forecast the first surplus in a decade following the GFC. Of course, the onset of the “COVID recession” in 2020 has changed everything and as expected this year’s Federal Budget has projected a deficit of $213.7 billion or around 11% of GDP. This reflects the financial consequence of policy measures designed to slow the spread of the virus and provide direct fiscal support to cushion the economy which to date totals some $257 billion. 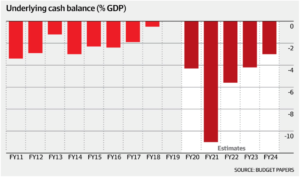 The overall thrust of the Budget is to suspend any notion of fiscal austerity for the time being and focus on measures to stimulate the economy out of recession. While aggregate debt is now approaching a staggering $1 trillion, the government argues that with 10-year bond yields around 0.85%, debt is cheap and financing costs will not put undue strain on future Budgets. The short-term priority is to stimulate activity to grow GDP so that debt as a percentage of national output falls organically over time.

The main highlights of the Budget were to bring forward the planned 2022 tax cuts to 2021, $3 billion in infrastructure spending, very generous tax write-offs for investment by companies with less than $5 billion turnover and a new youth worker wage subsidy. While there were plenty of handouts in the Budget there was little in the way of structural reform necessary to improve productivity. As with any Budget, forward projections need to be taken with a grain of salt, especially with so much uncertainty concerning the policy direction to deal with COVID and the very optimistic presumption that a vaccine will be available and widely distributed during 2021. 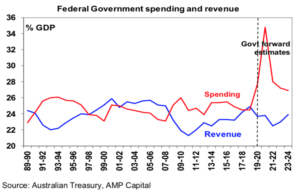 Making sense of the US election

On Tuesday November 3rd, the US will conduct a general election, which involves the Presidency, all 435 seats in the House of Representatives and 35 of the 100 Senate seats, of which 23 are held by Republicans and 12 by Democrats. The current state of play is that the Republicans hold the Presidency and Senate while the Democrats control the House of Representatives. The key race for the Presidency pits the incumbent President Donald Trump against the former Vice-President Joe Biden. With only 3 weeks until election day, opinion polls heavily point to a Democratic “blue wave” which would hand the Democrats control of both houses of congress and the White House.

With voting not compulsory in the US, opinion polls are often skewed by voter turnout assumptions for both sides, especially in this COVID aware environment. The greater use of mail-in ballots will possibly result in legal challenges due to the potential for fraud.

Biden to date has adopted the “small target” approach to his campaign, limiting his public appearances and relying on the personal unpopularity of the President to get elected. While personally affable, he has proven to be gaffe-prone over the years and known to shift his position regularly on key policy issues – the latest being his stance on fossil fuel “fracking” which he has been both for and against during the course of his campaign. The contrast between the two Presidential candidates could not be more stark; Trump the unconventional, bombastic ex-businessman/reality TV star, Biden the 47 year career politician including 39 years as Senator for Delaware and 8 years as Vice- President to President Obama. While it is difficult to precisely define the Biden policy agenda, he has announced he will repeal the Trump personal and corporate tax cuts, revive a modified version of the Affordable Care Act (Obamacare), place much more emphasis on environmental issues and adopt a more globalist approach to foreign policy. An emerging issue is whether he supports “packing” the Supreme Court by adding additional justices to neutralise the current conservative majority on the nine-member bench, soon to be 6-3 with the likely pre-election confirmation of Judge Amy Coney Barrett. The US Supreme Court acts as the third arm of government to determine the constitutionality of laws passed by congress and can be very influential on key legislative outcomes. President Trump on the other hand promises more of the same, lower taxes, less regulation, tough on border control, energy independence and an “American first” trade and foreign policy platform. Neither side places any importance on fiscal austerity or debt control, once a defining contrast between the parties. While Trump’s policy agenda is deemed to be more market friendly, a decisive Biden win would remove the uncertainty of a drawn-out contested outcome as occurred in Bush vs. Gore in 2000 which was ultimately resolved by the Supreme Court. Against this, with complete control of congress and the Presidency, markets will be wary that the more progressive elements of the Democratic Party may drive policy in a Biden administration.

There is no change to our broad strategy position. Low interest rates, easy liquidity together with fiscal stimulus will continue to support equities in the short term. Looking out to 2021, the path of economic recovery and market direction will be determined by whether policy makers will pivot in their approach to the management of the virus. The availability of an effective vaccine and therapeutics will assist in this regard but absent these, a more nuanced “risk-based” approach is necessary to replace the blunt lockdown/slowdown methods employed around the world. With six months of hard data now available, the world’s leading epidemiologists supported by World Health Organisation have concluded that lockdowns are a poor virus management mechanism due to the myriad of adverse health, economic and social consequences they produce. A key signal in our asset allocation approach is to look at earnings revisions as a guide to the medium-term direction of the equity market. As greater certainty emerges concerning the economic outlook, this signal should turn positive which would give validation for a higher allocation to equities in multi-asset portfolios.