News
Themes For April
Equity markets built on the strong gains recorded in March to post further impressive results in April. The US led the way once again, recording an impressive 5.3% rise buoyed by expectations of a gradual reopening of the economy together with the announcement of fiscal stimulus packages totalling a staggering $6 trillion by the Biden administration. US GDP for the March quarter rose by an impressive 6.4% to be now approaching the aggregate level reached just prior to the pandemic. The Australian market also posted an impressive gain, advancing by 3.5% driven largely by strong performance from technology and materials stocks. The burgeoning iron ore price, which is now approaching US $200 a tonne, boosted the performance of Australia’s major miners and pushed the AUD to 78c against the greenback. 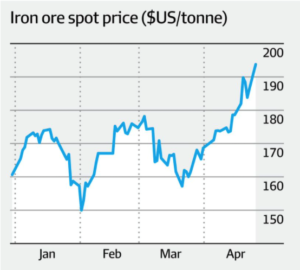 Inflation concerns that caused market unrest during February have subsided for now, particularly following confirmation that the Australian CPI increased by just 1.1% over the 12 months to the end of March. The RBA reaffirmed that inflation was not an immediate concern as they maintained their monetary policy stance. Bond markets were placated by this news with yields subdued over the month.

How real is the China threat to the Australian economy?

Australia is in the unique position of having very strong economic ties to China, but with an equally strong political alliance and military dependency on the United States. Foreign investors often regard Australia (and the AUD in particular) as a proxy for China. With the souring of relations between the US and China in recent years, it has been difficult for Australia to navigate the appropriate path between its national security and economic interests. Over the past 12 months there has been a material deterioration in political relations between Australia and China. The genesis of this was the Australian government’s call for an independent enquiry into the origins of the coronavirus outbreak, not an unreasonable request given the loss of over 3 million lives from a pandemic that originated in China. In recent times this has been further exacerbated by the exclusion of Huawei from the 5G market on security concerns together with the Federal government’s rescission of the Victorian “belt and road” deal with Beijing and a review of the Port of Darwin long-term lease deal with China. In direct retaliation to these events, the Chinese government has imposed trade restrictions on Australian goods such as beef, barley, timber, coal and wine. In reality, these are more symbolic than material as they account for only 1% of GDP. Of much greater significance is that export of iron ore continue apace as demand from Chinese steel mills is being powered by domestic infrastructure investment. Australia is the world’s largest producer of iron ore, accounting for 50% of global exports, and is keenly sought for its high grade, reliable supply and low freight costs. Supply from our principal competitor Brazil, has been plagued by environmental problems and more recently COVID outbreaks among mine workers. The simple fact of the matter is that this is a co-dependant trade relationship as there’s very little alternative supply with the same reliability and quality.

While there is some risk China may see an opportunity to advance its military ambitions towards Taiwan, the possibility of US intervention and severe trade sanctions should be a sufficient deterrent. In conclusion, despite a lot of bluster and posturing, in aggregate terms, our trading relationship with China should remain intact and leveraged to the improving economic outlook in that country.

Despite the fact that major share markets are either at, or approaching, all-time highs, we don’t hold the view this means they are expensive. With record low interest rates and easy liquidity to prevail for some time and economies recovering as pandemic restrictions are progressively lifted, the environment is supportive for equities.