News
Themes For February
Bond markets took centre stage in February with longer term bond yields moving sharply higher reflecting concerns about inflation. While central banks are determined to anchor cash rates at very low levels for several years, longer term bonds are much more sensitive to inflationary expectations which has resulted in a steepening of yield curves.  Bond yields have now returned roughly to pre-pandemic levels with US 10-year bonds up 37bp to finish at 1.4% while in Australia the rise was more significant with 10-year bonds 81bp higher to close the month at 1.9%. This took the gloss off an otherwise healthy equity market late in the month, as investors repriced stocks with long term earnings growth profiles. This was particularly felt in the technology heavy NASDAQ which underperformed the 2.8% advance of the broader S&P500. The Australian market followed the US lead advancing 1.5%, buoyed by strength in the resource sector. Other exchanges posted healthy gains with Japan up 4.7% and Europe 3% higher. The AUD was firmer against the USD finishing at 78.3c and continues to be underpinned by the strength of the Australian economy and firm iron ore prices and seems destined to push though the 80c barrier fairly soon.

How real is the inflation risk?

In the 1970’s and 80’s inflation was the scourge of financial markets. Sparked by two separate oil shocks, global equity markets suffered major corrections as a consequence of deep economic recessions. A refocus of central bank policy to targeted inflation from the mid-90’s onwards together with the deflationary effects of technology driven productivity gains and decentralised wage outcomes saw a secular decline in inflation.  In the past 10 years, inflation has barely reached the lower band of most central bank’s target ranges. In fact, in countries such as Japan, deflation (falling prices) has been a greater economic ill. Since the onset of the pandemic however, stimulus programs adopted by governments and central banks to compensate for economically restrictive COVID mitigation measures has brought the spectre of inflation back into focus. The monetarist economic theory of “too much money chasing too few goods” suggests that massive deficit spending programs financed by money creation will ultimately lead to the devaluation of fiat currencies and higher inflation. New theories such as “Modern Monetary Theory” have argued that budget deficits are of little relevance given they can simply be financed by money printing without economic consequence. Clearly this is an absurd proposition which should now be consigned to the fiction section of economics faculty libraries.

While we acknowledge the long-term inflation risk is real, in the shorter term the excess capacity that exists especially in the labour market means that economies can still grow substantially before inflationary pressures begin to emerge. In Australian for example, there have now been two consecutive quarters of 3% plus growth, however, aggregate GDP still remains 1.1% below its pre-pandemic level and inflation sits at just 0.9% against an RBA target of 2-3%. With unemployment still at 6.4% and likely to rise at the end of March once JobKeeper runs off, there is unlikely to be wage push inflation in the near future. In addition to this, pricing behaviour is heavily influenced by inflation expectations which are still entrenched at very low levels given our recent inflation experience. Rather than consumer price inflation, we are experiencing asset price inflation, most notably in the residential property market as the easy availability of cheap mortgage finance has propelled property prices sharply higher despite the absence of immigration demand. This will be closely monitored by the RBA but will probably be dealt with via prudential lending controls, rather than via higher cash rates.

The equity market is currently wresting with the counter balancing influences of an improving economic and profit outlook against the spectre of higher bond yields. While rising inflationary expectations is unequivocally bad for the bond market, the equity market can still outperform in this environment as strong demand and greater pricing power will benefit profits. Following the recent profit reporting season there has been a strong positive revision for Australian company earnings which bodes well for prospective share market returns. 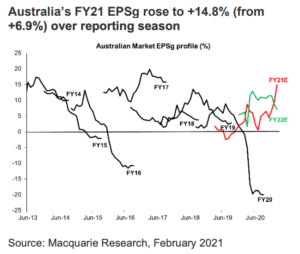 While the recent sell off in bond markets is more cyclical rather than secular, there is no doubt that the tide is moving against bonds which is the asset class most exposed to rising inflation. As downside protection is paramount in this asset class, we have decided to switch the conventional government bond exposure to inflation-linked bonds where their capital value is indexed to inflation. While we remain constructive on the outlook for shares, it is important to have an appropriate risk offset for the more volatile equity market positions.