News
Themes For June
Financial markets experienced a volatile finish to the Australian financial year with equity markets in the main posting negative returns for the month. While the pivotal US market scratched out a small 0.5% gain, European markets suffered sharp falls led by France -4.2% and Germany -3.9% driven by an expectation that the ECB will begin to reduce their monetary stimulus by tapering their QE program consistent with a recovering EU economy. Across the channel in the UK, the share market fell 3.1% as the opportunistic early election call by Theresa May spectacularly backfired resulting in a minority Conservative government thereby weakening the UK’s mandate in Brexit negotiations. Asian markets faired a little better with Japan, Hong Kong essentially flat while the Chinese market spiked 5.2% amid optimism about the strength of their economy. In Australia, our market was square for the month following a sharp fall in May. Energy stocks fared worse pushed down by the weaker oil price which fell by 8% and Real Estate Investment Trusts (REIT’s) fell by 5.4%, negatively impacted by a 15bp back up in government bond yields. Healthcare stocks were the standout for the month posting an impressive 5.7% rise. The $A shrugged off the news of a struggling domestic economy and the shrinking interest rate differential with the US. It rose 2.7% against the $US on the back of an 8% rise in the iron ore price which partially recovered from its sharp fall last month.

It’s hard to remember a financial year where political events were so prominent in determining the direction of financial markets.

Firstly, the Brexit vote in the UK took everyone by surprise as the surge in British populism was missed by the pundits and raised concerns about both the impact on the UK economy and the prospect of a gradual disintegration of the continental EU if other countries chose to follow suit.

Perhaps the most stunning electoral upset in history was the November election of Republican candidate Donald Trump as the 45th President of the US. The US equity market rallied strongly on the prospect that tax cuts, infrastructure spending, and reduced regulation would lift the US out of its low growth trajectory and boost corporate profits. In the last few months however the tide of populism has been halted by the election of more moderate pro-EU governments in Holland and France.

In Australia, Prime Minister Malcolm Turnbull surprisingly called a double dissolution election, which meant the full Senate was up for election rather than the normal half Senate. While Coalition government was returned with a razor thin majority in the lower House, the composition of the Senate went from being difficult to manage to dysfunctional with minor parties and independents making the task of passing any serious economic reform next to impossible. As a consequence, the May Federal budget produced very little to stimulate a struggling economy.

Despite the newspaper headlines describing global turmoil surrounding referendums, elections and geopolitical events, the financial year proved to be an exceptional year for equity markets with strong returns recorded by most major exchanges. Share prices were inflated by easy monetary conditions, and the prospect of improving global growth and stronger corporate profits.

Leading indicators of growth such as the Global Manufacturing Purchasing Managers Index (PMI) shown below, are pointing to a pick-up in global growth for the year ahead. 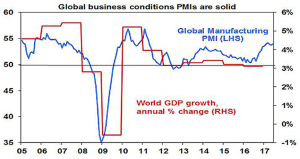 Amongst the major markets, Japan delivered 26%, Germany 26%, the UK 11% and the bell weather US market rose a healthy 15%. Australia was a relative laggard amongst its global peers but still managed to return 13% with generous dividends contributing a good proportion of this return.

Things were not so rosy for defensive assets such as government bonds which suffered from the gradual tightening of global monetary conditions led by the US which has both discontinued its QE program and tightened cash rates on 4 separate occasions. As discussed in length in a recent monthly report, sovereign bond markets are likely to deliver poor investment returns for many years to come meaning that investors are paying much too high a price for the capital security they offer.

It’s worth remembering that the world’s major government bond markets such as the US, Japan and across Europe have been grossly distorted by large-scale Central Bank buying programs to ease liquidity conditions and stimulate growth and inflation. This has pushed global bond yields down to artificially low levels and in some case to negative levels which is clearly unsustainable. Rising bond yields reduces the capital value of bonds, which can more than offset the income return provided by coupon payments, as was the case for Australian bonds which returned -0.8% over the past 12 months.

The process of unwinding these programs will be gradual and drawn out, but in coming years the ECB and BoJ will follow the lead of the US Fed and firstly taper their bond purchase programs, then gradually increase cash rates as economic circumstance permit and finally allow a run-off of bonds held on their balance sheet. That is, as bonds mature they will not reinvest the proceeds back into the bond market. The reduced buying support for bonds will place upward pressure on bond yields.

It is very likely in our opinion that the pattern of growth assets like equities outperforming defensive assets like government bonds, fixed term accounts and cash deposits will continue over the next 12 months. The process of normalizing monetary conditions will create increasing headwinds for bond markets resulting in low and perhaps negative returns from what is considered to be a risk free asset class.

While this will create some adverse valuation adjustment for equity markets, stronger profit growth on the back of an improving global economy will be the dominant factor driving share prices higher over time. While the US economy is the most advanced in terms of its recovery, the US share market has discounted a lot of positive news and equity valuations of around 17-18 times forward earnings are quite full.

Amongst the major market regions, we are most positive on Europe and have increased our weighting to the region progressively in recent months. With growing evidence that the economic recovery is gaining traction along with receding risks of EU fragmentation and monetary policy that is likely to remain easy for some time yet, the cheaper valuations for European equities make them an attractive proposition. While the ECB will gradually taper bond purchases this will occur consistent with stronger growth and reduced deflation risk which will be positive for equities.

As the chart below shows, improving sentiment in the Eurozone is a reliable forward indicator of economic growth for the region. 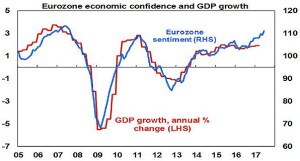 As mentioned last month we are relatively sanguine about the prospects for the Australian share market as the economy continues to struggle to rebalance following the end of the mining investment boom. While the RBA will be on the sidelines for some time with respect to monetary policy, the $A has proved stubbornly strong in recent weeks which is complicating deliberations concerning future interest rate settings. A short term bounce in the iron ore price provided some support for the $A but the near certainty of a reduced interest rate differential with the US over the balance of the year will put downward pressure on the local unit.

This will augment the return from unhedged international equities, which supports the overweight position we hold in diversified portfolios. We have a neutral view on listed real assets which have been negatively affected by the back up in Australian bond yields but will benefit over time from a positive revaluation cycle for their underlying property and infrastructure assets. With interest rates still very low, income-starved investors will still keenly seek high quality REIT’s and listed infrastructure securities.