News
Themes For May
Equity markets continued to move higher in May as the very easy global liquidity conditions that have prevailed for some time now, continued to be the driving force for financial markets. In Australia, a surprise 0.25% rate cut by the RBA in early May propelled the local market 3.1% higher with Industrials up a healthy 4.5% but the resource sector fell by 5.3% on concerns about the outlook for commodity prices and a sharp fall in BHP following litigation over a mining accident in Brazil. The interest rate sensitive listed property trust sector was up 2.6% as investors sought out higher yielding alternatives to cash and fixed income. The Australian Federal Government also handed down their pre-election Budget which had very little impact on the market as most policy initiatives were well telegraphed in advance. The US equity market edged 1.8% higher despite growing conviction about a near term rate hike, while European markets led by Germany firmed by 2.2%. The UK market continues to be weighed down by concerns of a possible Brexit, advancing by just 0.3%. Australian 10 year bonds returned a solid 1.3% for the month while the $A fell 5.1% against the $US, once again driven by the rate cut which narrowed the interest rate differential with the US. The oil price once again posted strong gains up 6.9% to finish the month at $49 a barrel. Oil has now risen by more than 85% since touching a 12-year low in February on signs the global surplus is easing.

US rate rise is now back on the cards

Earlier in the year there was genuine concern that the US economy may be drifting into recession, which prompted a sharp correction in markets in January and early February. The good news is that in recent months, data has printed much stronger in the US led by consumer spending. While this is good news for the global economy which is still heavily dependent on the US, it is a double edged sword in that the US Federal reserve is now more likely to consider further increases in US cash rates as part of their interest rate “normalisation” process.

Federal Reserve Chair Janet Yellen has made it clear however that they will be cautious in their approach to raising rates. To increase cash rates further from here will require conviction the US economy is resilient enough to sustain it and they will also take into account global risks in their decision making process. It is highly unlikely the Fed will risk stalling the recovery given how long it has taken to engineer so far. The chart below shows that the futures market has now priced in a much higher probability of a rate rise compared to a month earlier.

The strong 12-14% rebound in equity markets since mid-February has raised the specter of whether markets are now expensive and prone to a correction. Of some concern is that May to October has traditionally been a seasonally weak period for share markets. Some the largest market corrections in history have occurred during this period in particular the market crashes of 1929 and 1987 and the post Lehman Brothers collapse in 2008.

While the risk of a short-term correction is ever present in markets, there are sound reasons for longer-term optimism. Despite the recent market rally, most valuation measures are still reasonable especially when allowing for the very low level of interest rates and bond yields. The chart below looks at the risk premium offered by shares compared to bond markets and shows shares in Australian and overseas are still modestly cheap. 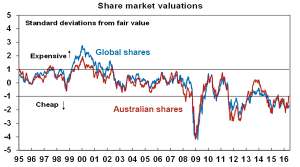 In Australia, the combination of an interest rate cut and a lower $A in aggregate represent a meaningful easing in monetary conditions which bodes well for economic growth and company profits. As the chart below demonstrates, with underlying inflation now moving well below the RBA’s lower band of 2%, there is significant scope to cut rates even further which will place even more downward pressure on the $A. The Australian economy is continuing to rebalance itself following the unwinding of the mining boom with consumer spending, housing construction and services like tourism and education services beginning to pick up the slack from the mining sector. 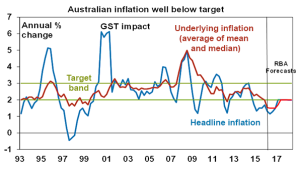 Of some short term concern is the potential impact of the Australia Federal election to be held on 2 July. With opinion polls very close, the prospect of a minority government and a fractured Senate would not bode well for the ability to enact decisive legislation particularly on the important issue of deficit reduction. Markets tend not to like uncertainty, so if this situation prevails in coming weeks, there could be some short-term nervousness in the local market.

Despite the prospects of a US rate rise, global monetary conditions are likely to remain very easy for the foreseeable future with further easing likely in Europe, Japan, China and Australia. As we have seen over several years now, easy monetary conditions have been a powerful driving force for shares. The risk of a global recession led by the US has now all but abated and it is increasingly likely that company profits will gradually start to improve from here. On balance, we still favour equities over more defensive assets such as cash and fixed interest which are becoming less attractive as global monetary policy continues to ease.