News
Themes For October
October has historically been a poor month for share markets, however, the Australian market bucked this trend recording a solid return of +2.1% driven largely by strength in the banking sector and further gains in technology stocks. Some pre-election jitters in the US saw its market decline 2.8%, not helped by a rise in US bond yields which saw some rotation out of growth stocks such as some of the key technology names. A second wave of COVID infections and the prospect of further shutdowns, saw Europe down 5.5% and the UK 4.9% lower. Despite the sell-off in the US, Australian bond yields were fairly stable anticipating a 15 basis point rate cut by the RBA on Melbourne Cup day which was subsequently delivered, along with the announcement of a further $100 billion of quantitative easing over the next 6 months. Adjusted for the relative size of each economy, the RBA has expanded its balance sheet in a similar fashion to the US Federal Reserve. The RBA announcement also saw the AUD lose ground against the USD to finish just over 70c. 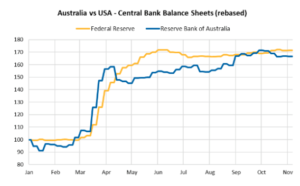 The much-anticipated US election was much closer than the opinion polls suggested but still resulted in Democratic nominee, former Vice-President Joe Biden elected as the 46th President of the United States. While President Trump has yet to concede defeat and is disputing the result in several key states, it appears certain that Biden will be sworn into office on January 20th  2021. In somewhat of a surprise, it appears likely that the Republicans will retain control of the Senate although this depends on it winning at least one of the two run-off elections in Georgia to be held in early January 2021. Even more surprising was that the Democrats unexpectedly lost several seats in the House of Representatives and while they will retain the majority and will appoint the next Speaker, their margin has been substantially reduced to be within reach of the Republicans at the mid-term elections in two years-time. These results suggest that while the Presidential race was certainly a personal repudiation of President Trump, it could be equally concluded that Americans were not comfortable with some of the more progressive policies of the Democrats and divided their vote to ensure that adequate checks and balances are maintained in Washington.

From a market point of view, the likelihood of the Senate remaining in Republican hands was significant and resulted in a strong post-election bounce. This will prevent the new Biden administration passing non-market friendly policies such as reversing the Trump corporate tax cuts and embarking on profligate spending which would further exacerbate an already alarming Federal budget deficit.  It is likely that in the “lame-duck” session before the new congress is sworn in, there will be a compromise COVID relief package agreed to, although much lower than the $2.2 trillion previously rejected by the Senate. The election result is neutral from a market standpoint given the likely outcome of divided branches of government. As a consequence, the Federal Reserve will once again be the most influential policy arm in the US for the foreseeable future.

The RBA’s move reaffirms the fact that central banks will maintain low interest rates and easy liquidity for the foreseeable future. It is less clear that given large fiscal deficits and burgeoning debt levels, whether governments can maintain the current level of financial support to compensate for the economic impact of COVID mitigation measures. In Australia, the JobKeeper program is due to run-off in March 2021, while JobSeeker will be scaled back down to its base level. This highlights the imperative for economies to be able to operate at higher levels of capacity to allow more organic employment growth. To this end, the announcement by major US pharmaceutical company Pfizer, that their COVID-19 vaccine had shown a 90% protection level in phase 3 clinical trials, was a major boost to market sentiment. Previous expectations were for a protection level of just 50%. While formal FDA approval is still required, it appears increasingly likely that a major roll-out of this vaccine (and potentially others) could commence by the March quarter 2021 with the possibility that by the end of the year, meaningful vaccination levels could be achieved globally.

For the first time since the initial outbreak, markets now have some confidence that the global economy could once again operate at close to pre-COVID levels by 2022. This is positive news for share markets, especially for sectors most severely impacted by the virus such as airlines, tourism, hospitality, banks and traditional retailers.  While share prices have risen sharply since the market’s nadir in late March 2020, this has largely been on the back of low interest rates, easy liquidity and government spending. The prospect of effective vaccines leading to a better macroeconomic environment will lead to positive revisions to corporate earnings and ultimately higher share prices. While there is still a lot of water to pass under the bridge, the outlook is all of a sudden looking much rosier.