News
Themes For September
Share markets put in a solid performance over the month with all major exchanges posting positive returns led by Japan up 5.1% and Korea 4.8% which rose on US China trade optimism, despite little progress in resolving the dispute. The US market improved by 1.7% on the back of a further 25 basis point interest rate cut by the US Federal Reserve and in spite of a swirling political controversy engulfing the Trump administration. The Australian market nudged 1.5% higher, driven largely by a strong banking sector which rose 5.9%, offset by weakness in defensive sectors such as Telcos, which fell 4.4%. Both Europe and the UK were up 3% despite no clarity on the Brexit process, with the 31 October deadline set by the British PM Boris Johnson fast approaching. With some market participants expecting a larger rate cut by the Fed, US treasury yields rose 18 basis points, which pushed Australian bonds yields 7 basis points higher to finish at 0.96%. The AUD was steady against a USD that was a touch stronger against the other major cross rates. In commodity markets, the major mover was oil, which was up 5.8% following a drone attack by Iranian backed Yemeni rebels, causing supply disruption in Saudi Arabia and increasing political tensions in the Gulf. 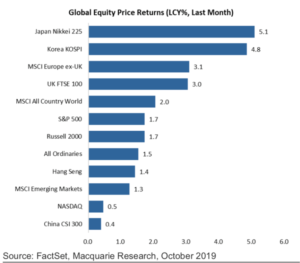 What does a possible Trump Impeachment mean for markets?

It’s often said that US Presidents are given too much credit (and criticism) for their influence on the economy. It is rare to see a US administration that has so directly impacted financial market outcomes as the current one. While markets have welcomed tax cuts and regulatory reforms, the blunt use of protectionist tariffs, attempts to compromise the independence of the Federal Reserve and lack of fiscal discipline have been negatively received by the market. President Trump has been dogged by controversy even before his inauguration, including a two-year Special Counsel investigation into possible electoral conspiracy with Russia. A new scandal involving his dealings with Ukraine for possible political advantage has led the Democrats to commence a formal impeachment enquiry in an attempt to remove him from office before his term expires. Based on current evidence, it is very unlikely this will succeed and he will still contest the November 2020 Presidential election. The US Constitution sets a very high bar for Congress to remove a sitting President, in fact this has never happened in US history. The standard for impeachment is “Treason, Bribery or other high Crimes and Misdemeanours” rather than matters reflecting poor judgment, mal-administration or simply partisan political differences.

Impeachment is a two-stage process. Firstly, “Articles for Impeachment” outlining the case against the President must be drafted and approved by a simple majority in the House of Representatives. This could possibly happen as the Democrats hold a majority. Before the House potentially votes on the matter, there will an investigation conducted by the House Intelligence Committee, which has subpoena power to call witnesses. Being in the majority, all House Committees are controlled by the Democrats. This process will potentially take several months, as was the case with the impeachment enquiries involving former Presidents Nixon and Clinton.

The second stage of the process is that the Senate must then convict the President in a mini-trial presided over by the Chief Justice of the Supreme Court in order to remove him from office. This, however, requires a two-thirds majority meaning 67 votes in the 100 seat Senate chamber. With the Republicans holding 53 seats in the current Senate, this means 20 would have to vote with the Democrats for the President to be convicted and removed from office. The chances of this are highly improbable in such a partisan environment. With the next Presidential election only 13 months away, it is logical that this issue is best resolved at the ballot box.

From a market perspective, the downside of this impeachment process is that it consumes all of the Congress’s time and creates a hyper-partisan environment in which no legislation gets passed through both chambers. This is now likely to be the case for the remainder of President Trump’s term. Which will obstruct potentially positive developments on matters such as Infrastructure spending and trade deals from being passed by the House. For example, any new trade deal with China, would be a positive market development, but would be unlikely to be approved by Congress.

The USMCA trade deal with Canada and Mexico (NAFTA upgrade) was agreed to months ago but is being blocked by the Democrats to prevent a House vote. The US has also recently concluded a bilateral trade deal with Japan and is negotiating similar deals with the UK and Europe. The uncertainty is likely to be negative for business confidence as well, and could prompt the Federal Reserve to cut interest rates further than would have otherwise been the case but for this political gridlock.

The strategy implication of the US political turmoil is that it provides further grounds to be cautious about the 2020 outlook for the US economy and, by extension, the global economy. With profit growth still constrained to low single digits in most developed markets and valuations elevated due to low bond yields, markets are priced with very little buffer for any unforeseen adverse development. Implicit in our recent moves to reduce equity risk in multi-asset portfolios, is that there is not sufficient risk premium in equity valuations to justify an aggressive position given the numerous uncertainties such as this matter, the US China trade war, Brexit, Gulf oil tension, North Korea and Hong Kong civil unrest. This underscores the need for prudent diversification with an emphasis on downside protection, which we have proactively positioned for.